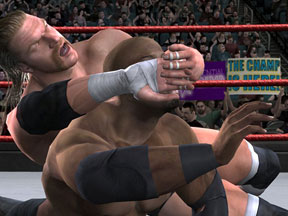 There was once a time I cared about watching wrestling. It was back during the "Monday Night Wars" between the then-WWF and rival WCW. Between the two organizations, we had memorable storylines such as the New World Order, D-Generation X, Stone Cold vs. Mr. McMahon, Hell in a Cell, and Mick Foley winning his first heavyweight title (and yes, Tony Schiavone, that did put a lot of butts in the seats.)

And bloodthirsty they were; the crowd was almost cult-like and were treated as part of the show, even going as far as providing their own weapons to use in matches (someone actually brought an original Sony PlayStation to a match, and it was used by New Jack!) They also were responsible for some of the more unique chants that are still used to this day, and even chanted the name of the promotion rather than a wrestler, even going as far as thanking the promoter, Paul Heyman.

But sadly that all changed in 2001. ECW filed for bankruptcy, and WCW was the loser of the Monday Night Wars (especially after crappy angles including David Arquette winning the WCW title.) Both were acquired by the same buyer, Vincent Kennedy McMahon of World Wrestling Entertainment.

Since that day, wrestling had not been the same, leading up to some horrid angles involving cradle robbing (Al Wilson,) necrophilia (Katie Vick,) exploiting the death of wrestler Eddie Guerrero, and even botching up what might have been a great dream match between WWE and WCW. But what hurts me most is what WWE did to ECW, a symbol of blasphemy so blatant that it even sent Paul Heyman out of the business and alienated wrestling fans such as myself.

In fact, it defected me to the Ultimate Fighting Championship, where I haven’t looked back since.

As a result, I felt the same way with playing Smackdown vs. Raw 2008. In the past, the Smackdown games were the best wrestling titles available on the market, but over the years the fighting engine has been getting stale, and even with the analog stick moves introduced last year it still isn’t enough to warrant a purchase if you bought last year’s version.

But this year’s version offers players a choice of a fighting style they can use for their WWE Superstar, each with their own special moves. For instance a brawler will use their own striking attacks, while hardcores will be more proficient with weapon attacks.

A new submission and escape system has been added as well, allowing players to decide on how much pressure they want to apply at the risk of fatigue.

And in terms of hardcore fighting, with the addition of ECW, there is also a new mode called "Extreme Rules," which includes weapon based fighting with no fear of disqualification. However it’s not the same ECW of old, but more in the likes of WWECW.

The main game can be played as exhibition or career (24/7) mode, but my biggest concern in the fighting engine against the computer is the cheap AI that always seems to counter whatever move you do, even on normal difficulty. No matter what I did, it was always countered, and at times almost to the point of being unfair.

The roster has also been updated for this year’s version, but many of those that I knew from the WWE have either quit, returned after publishing or have moved on to rival organization TNA. There is no Chris Jericho (who rejoined WWE after gold status,) but for some reason King Booker, who has moved on to TNA, is still on the roster. Personally I found the roster just wasn’t as interesting as is has been in years past. There are still the addition of legends that can be purchased or unlocked but the effort isn’t really worth it.

Admittedly the visuals are amazing. The WWE Superstars are eerily realistic. They move authentically as well, but it’s the audio that seriously suffers this time around. While all of the wrestler’s entrance themes are intact, it’s the voice acting that ruins it all, and considering it’s all done by the WWE Superstars themselves, it doesn’t make sense. The key culprit is the commentary, as it doesn’t truly follow the action, but is rather some meaningless jargon that is repeated ad nauseam. THQ and Yukes tried commentary a few years ago and it failed. It’s not really worth bringing it back.

In the end, Smackdown vs. Raw 2008 is not worth a purchase for those who have picked up last year’s version. The series, just like the real WWE, is in need of a major overhaul — and the sooner the better.