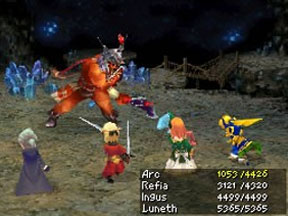 US Gamers Finally Get FFIII

Finally, a solid RPG for DS fans to dig into, Square Enix’s reincarnation of the "real" Final Fantasy III which managed to elude North American gamers years ago makes it’s debut on the Nintendo’s innovative handheld console and delivers top-notch graphics and audio as well as a pretty fulfilling game play experience.

Right off the bat, the opening introduction is going to floor you as the true graphical power of the DS is unleashed boasting a collection of incredible cinematic cut-scenes, a feat that most, up to this point, would have probably thought could not be done on the DS platform.

It’s clearly evident that the original game has been revamped all the way around as it receives a much needed face lift and upgrades from it’s classic 2D style presentation and takes on a more next generation look with it’s new 3D graphics engine. New character models have now been fleshed out to make their appearances more defined and the old flat canvas-like landscapes, dungeons, and towns that players first began exploring years ago all now rise up off the map with newly added dimensions and help to give the world of Final Fantasy a little more depth.

A sensational audio engine helps to compliment a strong graphics engine and sets that epic tone that the series has so long been known for. The soundtracks of the original game have been remixed and flow extremely well with all the action happening on-screen.

The story begins when a curiously adventurous orphan, who goes by the name Luneth, falls into a hole created by an old earthquake and discovers a magical crystal, which informs him that he is one of four blessed souls destined to save the world from a soon coming dark prophecy spoken of years ago.

It’s not long before the stage is set as Luneth discovers and joins up with the other three chosen ones the crystal spoke of: his shy best friend, Arc, who seeks to overcome his own inner fears and ambitions, Refia, a headstrong girl raised by a mythril blackSmith, and finally a loyal guardsman of the King’s army named Ingus. Together, they set off to discover the secrets of the four elemental crystals hidden around the world and unravel the dark prophecy one piece at a time and bring hope to the world again.

The game faithfully sticks to the solid turn-based game play roots the series has been known for in the past so don’t expect much change there. However, what is new to talk about is the integration of the newly revamped "job" system which was first implemented into the Final Fantasy MMORPG. If you’ve played FFO, the job system will be instantly familiar to you as you begin learning, developing, and customizing new skills for all of your characters.

All of the characters start off by default with the "Free Lancer" job skill. Freelancers don’t have any expertise in any particular skill but they can yield nearly any weapon and even have limited magic skill. Still though, their overall abilities are pretty below average. As you proceed through your adventure, however, new job fields will become available.

You can decide to specialize in melee job fields such as "Knight," "Ninja," "Monk," "Warrior," and "Blackbelt" or become adept in the school of magic as a "Black Mage," "White Mage," "Red Mage," "Magus" or even a "Devout." Of course there are other special classes of jobs to excel in as well such as "Thief." "Geomancer." "Viking." or "Scholar" and many more besides.

With 22 total job fields available for players to specialize in you can spend hours, weeks or even months building your characters up and getting the most out of this game. The best part about the job system is that you can totally customize the game to your style of play or interest and have a tremendous impact on the success of failure of your adventures.

Outside of the job system you’ll find all of the usual bells and whistles of a solid Final Fantasy RPG. You can browse towns and talk with people to unlock information or visit the armor, weapon, magic shops, or inns, to find potions, spells, swords and shields or just a good night’s sleep to revitalize magic and hit points.

You’ll have to look around more closely sometimes to unveil new treasures or discover hidden passages. All of these familiar elements help to shape the game as we all know it and make for an overall pleasurable role playing experience.

Ultimately, Final Fantasy III is a very well rounded RPG and a God send to Nintendo DS fans who haven’t had a lot to talk about up to this point in terms of role playing games. The graphics are some of the most impressive seen on this console to date and are followed up by super solid audio engine.

All of the old game play elements the series is known for remain solid and intact and the new job system really enables players to play through the game in truly the style they want to.

Though the storyline doesn’t have as much depth as former FF titles it’s certainly fluent and does manage to eek out more than a few peek moments. Finally, the series is complete for Final Fantasy fans who have longed to have this elusive title for themselves which proves to have been well worth the wait as it racks up a stellar 4 GiN gems.