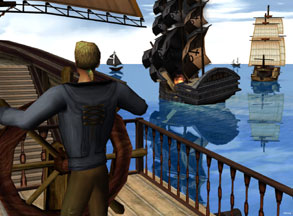 Pirates of the Caribbean Online

If you are like me (and millions of others) then you probably enjoyed the Pirates of the Caribbean movies. The scenery, the action and even the somewhat convoluted plots kept me on the edge of my seat for the entire series. But once it was over, I felt a little, well, sad.

So it was with great joy that I learned about the Pirates of the Caribbean Online game from Disney Online. Released as a free downloadable game at disney.go.com/pirates/online/ it also has a subscription model where you can pay $9.99 per month to get better weapons, ships and the ability to form a pirate guild. The free version also has ads which the pay version does not. However, both versions of the game are quite good.

Given that the game is downloaded, I was not really expecting too much. I mean games like World of Warcraft Online and Lord of the Rings Online come on CDs or DVDs and still take a long time to install. So I did not think a completely downloaded game would be up to par. I had the game completely downloaded and installed on my system in a couple of hours.

That’s when I got my first surprise. The game actually looked really good. But this was part of an overall package. In fact, I don’t think I’ve ever experienced a massively multiplayer online game with a better opening tutorial.

You start out by making a pirate and choosing your outfit. The entire time Jack Sparrow is there (he is animated to look like Johnny Depp and sounds like him, but is voiced by a different actor) telling stories that go along with your costume and body type choices. It’s actually so funny that I tried on everything just to hear what he would say.

The tutorial has you doing basic stuff, firing cannons, piloting a ship, fighting low-level monsters and generally learning all the controls as part of a pretty fun story. And that is before you even get dropped into the game. It’s exactly what you want in a game with an E 10+ rating.

Let me diverge from the main review for a moment. Most online games, even those with young age ratings are not really always appropriate for younger players, but Pirates Online really is, or at least is as close as I think you can get. They do a lot to keep it acceptable for young players, without turning off the adults. For example, when you create your character’s name, you can pick from a pre-chosen list, or you can write your own. But if you write your own, you will have to use a generic name like Buccaneer until the name is approved. And every unique name goes through an approval process, which while a minor annoyance, keeps everything clean. Also firearms are in the game, but you can’t shoot them at any living people, just animals and undead like skeletons and zombies. It doesn’t detract from the game, but keeps it safe for younger kids. In fact, the movies and even the theme park ride itself (remember that is what this is all based on) is far darker than the online game.

Amazingly, once you have your pirate and have gone through the tutorial, the game itself is not unlike others I have played (there have been so many over the years) in that you are out there going on quests, fighting monsters and improving your character. There are different zones like hidden pirate caves, lush jungles and desert islands with plenty of monsters to fight. The one complaint I have here is that some of the zones are a little mixed. You will be working your way thought them fighting a bunch of creatures about your level and suddenly you will get struck down by something that is almost fifteen levels above you — which you are not at all expecting to be in the same area with the lower level stuff. I’m not sure if this is just growing pains with the game as they define levels and zones or if the monsters are purposely mixed together like that, but it’s a little strange.

Thankfully, if you die it’s no big deal. You simply end up back in jail, which is how you started the adventure. Inside the other cells are all the other people on your server who died and there is one sleeping guard by the wall who has the best job in the world because he never has to do anything. He never even wakes up. You simply kick open the door to your cell and walk out along with everyone else. There is a slight penalty to your character’s effectiveness for a short time after that, but this can be reduced by more combat, or simply waiting for the timer to expire.

So far I have mostly talked about the landside of the game, but there is another part of the game which is even more fun and that is adventures at sea. You are given a ship to start out with, a nice touch, and can jump right into missions. Basically there are lots of non-player ships out there from dread pirates to Royal British Navy frigates. You can engage them very easily with your cannons. I have found that you can take on larger ships if you are a good captain, constantly crossing the T on them and scoring hits while they can’t fire back. If you sink them, you get whatever loot they are carrying, until your own hold is filled up and you need to head back to sell the treasure.

Fighting alone from a ship is fun and you can get quite good at it, but you can also invite others to join your crew, which makes your ship way better in combat assuming the crew has not been drinking too much rum in real life. Having a crew means they can aim and fire the cannons, which is a lot more accurate than simply having the captain firing broadsides while trying to steer. Sure you will need to split the loot with your crew, but you will get a lot more loot in the long run as well, and get it a lot quicker.

There are also mini-games like playing poker which is a lot of fun. Special items like cheat cards can also be used, if you earn them by going out there and questing.

And of course as you get more money you can outfit your character with better weapons and cooler costumes. Or if you save up enough cash, you can even buy bigger ships. I actually did not have to play for too long before I was upgrading my ship, which was really enjoyable since that ended up being my favorite part of the game. The ship battles remind me of a 3D version of Sid Meier’s Pirates in that they are fairly simple to learn but complex enough that you will take a long time mastering them. And with a crew, it changes everything for the better.

Disney has also smartly eliminated some of the server restrictions found on other online games. If you are on one server and your friend is on anther, you can simply warp over to them, making keeping up a guild very easy. In fact, you can warp to set locations, so meeting up with your friends is easy.

If you liked the Pirates movies then you should give Pirates of the Caribbean Online a try. And with the free version, you don’t have anything to lose. My guess is that you will probably be upgrading to the paid account in short order, though the game can be almost as fun in free mode as the core gameplay does not really change.

And parents, here is a game that you can feel safe about letting your kids play. Who knows, you might even end up, heaven forbid, playing with them. After all a family that pillages and pirates together, stays together.

Pirates of the Caribbean Online earns four and one half GiN Gems for their pirate chest.