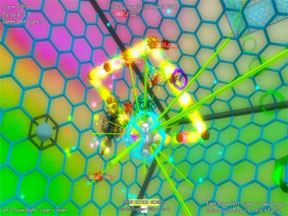 As you can imagine, we get a lot of requests to review games here at GiN. Most of them come in from normal channels like developers, publisher or PR folks. A few come in from other places, as is the case with Coniclysm. We were actually contacted by the producers who made the music for the game. They wanted us to check out the music, but since we are a gaming pub, we had to look at the game as well, though we are going to really focus on the music angle.

Coniclysm is best described as an arcade-like title, sort of a cross between Tempest and Asteroids, with a lot more added in. You play in a 3D world, though you are confined inside of a 3D cube as your playing space.

You are a little spaceship that can fly around within the cube. You need to do things like recharge your shields and energy, which is done by traveling through various types of gates. Each world has an objective, which normally is clearing out enemies within your play space. Once that is done, a wormhole opens up and you can fly through it into the next world.

You have a lot of powers at your disposal that can be used to fight within the various cube worlds. These unlock as you travel. Some examples are more powerful missiles and even drones that fly around with a limited AI and fight on your side. The enemies also get new powers as you move on, and do their best to bash your shields and make you run out of energy, which will end your life.

There is a good tutorial that slowly takes you through the basics of the game, so you should never get lost and not know what to do. In terms of difficulty, Coniclysm ramps up fairly quickly, but never really gets too out of control.

Graphically, the game is not that great. Although the 3D worlds are colorful, it’s really just a bunch of lines. Really it’s nothing to write home about.

Now we get to the sound, and why we are doing this review. The soundtrack is from a CD called Time? What’s Time? by Miguel Kertsman. I listened to the entire CD before I even looked at the game. The music is haunting and beautiful. It conjured up images of wind-swept castles and haunted marshes in my mind to the point that I thought that Coniclysm might be an adventure game. When I finally got to the game, it was a huge let-down. The music is the best part of Coniclysm. It’s better than the game by a wide margin.

In fact, the music doesn’t really fit with the game very well. A game like Coniclysm should have a forgettable techno beat I think, not a deep and powerful album like Time? What’s Time? with its unique sound. I heard the music again while I was playing, doing the little arcade tasks the game requires, and it was almost like the epic soundtrack was wasted. Even the multi-panel CD case tells an interesting story that would make a descent basis for a game. Everything about it says that it’s better than Coniclysm.

In fact, the only problem I have with the soundtrack is when Kertsman tries to add vocals. The group does not sing very well, and their voices are kind of grating compared to the rest of the tunes. Voices can be added to music like this, but it’s not easy. A group like Enigma or even Enya can pull it off, but I think Kertsman shouldn’t really try. It’s almost like trying to add a rock and roll theme where it doesn’t belong.

That said, I hope to hear more from Miguel Kertsman in the future, hopefully attached to a puzzle or adventure game that fits it a lot better.

The fact that Coniclysm is $5 on the Steam download service saves it. If you are looking for a cheap game to waste time with, it’s not a bad choice. And the soundtrack is good enough to tempt you to keep playing, if nothing else so you can hear more tunes.