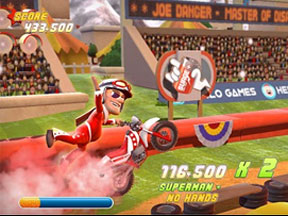 I don’t often play "just for the fun of it" games, but when I find one I like-such as Plants Vs. Zombies-I tend to fight on its behalf for years. Recently, I was casually browsing through the demo list on the PSN, when my interest was piqued by a funny looking cartoon man in a jumpsuit and a crash helmet. The ensuing experience led me to enjoy and ultimately purchase the Hello Games title Joe Danger, which is a motorcycle racing extravaganza.

I’ve been trying to figure out the proper way of bottling up my excitement for this game in print, but so far, I’ve come off sounding like a rube at every attempt.

The only thing that seems to make sense is to say that I was an Excitebike fan on the original NES, and Joe Danger took the basic enjoyable premise of that 1984 classic and built further upon its foundation by adding multi-tasks and challenges. And given that this is a DLC, you can grab it for only a couple dollars, money well spent.

I’m not going to lie to you and do a full review of the games story, or even discuss the merits of character in such a game as Joe Danger. I didn’t take the time to learn any of that, and most likely, neither will you.

Perhaps, if the gameplay becomes exhausted, you may venture to learn more about the protagonist, but odds are you’ll be too immersed in collecting blue stars and oversized coins-or finding the floating letters placed in out of the way spots on the race course-to even care (btw: the letters spell "D-A-N-G-E-R", because why wouldn’t they?).

This isn’t a game of depth, but saying this isn’t meant to be taken as negative strike on the title. Instead, it reaffirms the fact that Joe Danger has come to the party purely in the interest of spreading so good, old-fashioned fun.

Each race-with the exception of the actual head-to-head races-have more than one objective for a player to shoot for. In some levels there are as many as five or six objectives ranging from time trials to star hunts to target practice, making the replay value of this particular game skyrocket in comparison of other games on the market. And this is a downloadable game, which means the price isn’t even a real threat when considering this title for your library.

Basically, it’s a win any way you look at it.