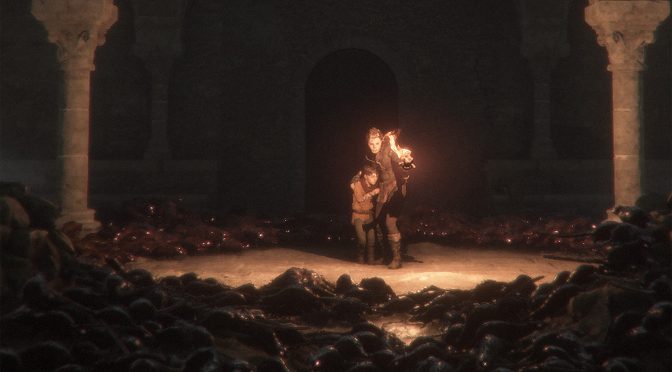 When I first heard about the game A Plague Tale: Innocence, I had an immediately negative knee-jerk reaction to the thought of what could exactly be entertaining about a game that focuses on the Plague and hordes of man-eating and crazed rats. But once I started playing it, I quickly realized that this was not the exact focus of the game. This game has the plot of a spellbinding historical fiction novel, amazing characterizations that make you fall in love with the two main characters, and white-knuckling adventure that leaves your heart beating a bit faster with your emotional investment into the lives of these characters. The graphics and soundtrack of the game are a whole other amazement. They leave you both in awe and horrified, sometimes simultaneously. 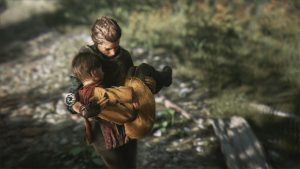 The tale begins in an idyllic setting of a French noble family’s homestead in the 14th century. Their storybook existence crumbles pretty quickly when they fall victim to invading soldiers. We are introduced to the two main characters named Amicia and Hugo as they are forced to flee for their lives. They are siblings, but are virtual strangers to one another (an intriguing plot point with details that are unveiled to the player as the game progresses). Amicia is the 15 year old daughter and eldest child of the family. She is the one that you’ll be playing in the game. She is smart, athletic, independent, and knows her way around a sling. Her little brother, Hugo, is a very frail and endearing five year old. He has led a very sheltered life up until the adventure begins due to his health and the secrets tied to it. Especially in the beginning of the game, you’ll be dragging him along with you in a way that is somewhat reminiscent to the classic game Ico. You soon find out that Hugo is the target that the Inquisition is trying to capture. 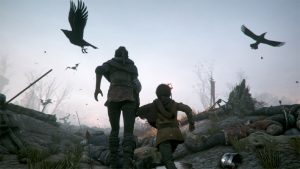 Watching the siblings’ relationship grow from a place of being virtually strangers to building a strong bond with one other is a pleasure to behold. Hugo may be a bit of a handful at the beginning of A Plague Tale: Innocence when running for your lives from the Inquisition, but once you’ve had a chance to breathe for a minute and reflect, you have to sympathize with the poor boy. He’s all at once lost his parents, his home, has been cast out into an unknown and cruel world, is stuck with a stranger of a sister for an impromptu guardian, and on top of all that is dealing with his own ill health all at the tender age of five. He becomes more confident, adorable and helpful to Amicia as the game progresses.

In terms of gameplay, each of the levels are fairly large, although they are extremely linear. They are also fairly varied, a mix of claustrophobic indoor and underground areas and wide open outdoor spaces that will have you feeling extremely vulnerable with limited cover. The challenges you will face will fall into one of three categories. They are, in order of frequency: stealth, puzzles, and combat. 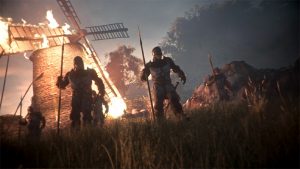 Amicia is extremely vulnerable to damage. She can be one-hit killed by almost any enemy or devoured by rats in a few seconds. As such, stealth is extremely important to your survivability. You will be hiding in tall grass, dark alleys and behind whatever cover you can find almost as second nature by the end of the game. There is no stealth meter, but you do see an alert when a guard sees or hears you. The key to getting through the levels mostly involves distracting guards, getting them to look the other way, and then hurriedly scampering to the next bit of cover. This is made more difficult in the early part of the game because of having to drag a not always cooperative Hugo along. 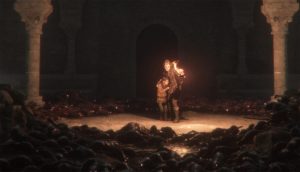 In terms of puzzles, the three things you will encounter most often are rats, rats and more rats. These plague rats are not your typical vermin. They are man-eating crazed masses of horror. Rats are almost an environmental hazard in the game swarming out to cover entire floors, hallways, alleys, and even battlefields. They will kill you if you step into one of their writhing masses. Unlike regular rats, however, they can be killed if exposed to bright light. As such, most of the puzzles involve using limited duration torches and other pieces of equipment to shoo the rats out of your way or to trap them behind a curtain of light in some dark corner where they can’t get to you. Eventually you can even use the rats as a weapon, sending them against Inquisition soldiers and other enemies. There are also a few traditional puzzles where you have to pull levers, turn cranks, and push carts into place to help you progress, but the rats will be the most memorable thing about this game by far. 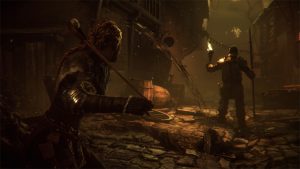 Due to Amicia’s vulnerabilities, combat in the game is limited. Amicia is an expert at using her sling, and can kill guards in one shot if she hits them in the head while they are not wearing a helmet. Eventually she can take care of helmeted guards as well, but combat is almost always a worse option versus stealth, unless the game is forcing you to fight in a scripted combat sequence. She is always outnumbered and has to take her brother and other companions you eventually meet in the game into account, as they are similarly vulnerable to melee combat. 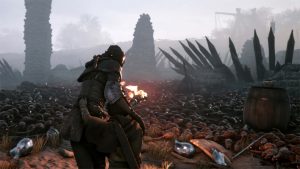 Another big part of the game is crafting, which is introduced to you through various helpful characters, including a group of orphans who will eventually become your own sort of youthful gang. You will need to collect crafting materials as you adventure, sometimes snatching them up unrealistically in the middle of being chased. You can craft upgrades for your sling and pouches, which improve their performance and capacity. You can also create better clothing to improve your stealthiness. The tradeoff is that you also need to craft special alchemy ammunition like flares that light torches from a distance out of the same collected materials. So you will need to balance what is more important: base equipment upgrades or ammunition.

Pick up a copy of this early contender for Game of the Year from Amazon today!

There is about 12 hours of gameplay in A Plague Tale: Innocence. That may seem a little brief for a modern single player game, but those 12 hours are packed with action and adventure, with almost no downtime. You and your companions must work together in the game to try and protect Hugo and at the same time survive while trying to complete missions to save him. 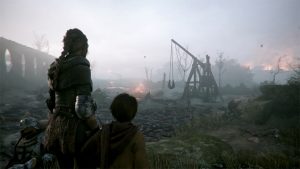 The artwork and graphics of A Plague Tale are a great aesthetic pleasure. They inspire feelings of awe in the beauty and serenity of the scenery one minute, and suddenly leave you terrified the next by the gore and horror that you encounter along the way. The music also strongly contributes to the whole atmosphere by unconsciously working hand-in-hand with the graphics to create and manipulate the whole mood, moment-by-moment throughout the game. Much of the games’ music and graphics are dark to match the temperament of the settings and really have a strong influence on the player in making you feel the anxiety, excitement, fear, and gloom that the characters are experiencing a lot during gameplay. The dissonance of the notes played by the stringed instruments during times of danger leave the player with a very eerie feeling which adds to the creepiness and excitement of the game’s darkest hours. It helps that the voice acting is also very good. 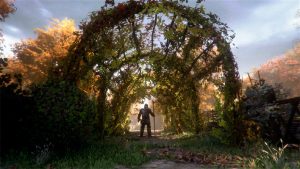 There are very few things I could think of as a negative for A Plague Tale. It would be nice to have a little down time here or there to let the characters and you unwind a bit from the constant, and at times manic pace of being chased by the Inquisition and other soldiers. There are so many people that want to see these kids captured or dead in this game, it can get very unnerving at times, and takes away some opportunities for character growth. It would be nice for poor Hugo to have more time to experience the outdoors and all its fun, normal creepy crawlies of nature during your adventures and experience a moment to exhale. Watching his amazement of frogs hopping by the riverside is adorable and one of the few seconds of happiness that the game allows for early on in the adventure. It would also be nice if the game allowed for Amicia to have some more armor or proactive combat skills that would permit her to be more on the offensive in combat. But I understand and accept why the game developers made this fifteen year old young lady develop her skills slowly and rely on stealth most of the game until she builds up her skills, crafting, equipment, and gains helpful allies through her experiences in this epic. 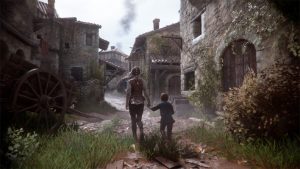 I really enjoyed this adventure, and I think a lot of other gamers who crave deep single player experiences will too. It’s a very engrossing title that makes you want to keep playing to help these characters through this dark adventure, and to discover more of the secrets that revolve around Hugo’s disease. The spellbinding plot, the amazing in-depth characterization – including the deepening relationship between Hugo and Amicia – the fabulous artwork and graphics, the emotion-evoking soundtrack, and all of the adventure and horror you encounter along the way make for an astoundingly entertaining game.