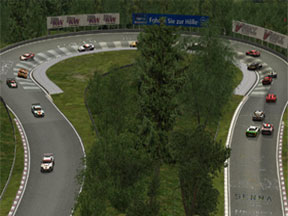 While I might not be into PC gaming as much as I used to be, one series I always come back to is the GTR series of racing games. Only with GTR am I able to find an impressive touring car racing simulator that combines excellent racing with a package that can run at a fast speed on my laptop. Last year’s excellent Race 07 was the most recent title in the lineup that passed with flying colors.

But now with the newest title, GTR Evolution, SimBin is back and better than ever by expanding the GTR series, and making it more enjoyable than ever.

The first thing that will be noticed is the addition of a new track, one that has never been in a PC racing game before. Sure it has been on consoles in the Project Gotham, Forza Motorsport, and Gran Turismo series, but this is the first time we will on a computer see the Nurburgring Nordschliefe, a 20 km monstrosity designed to challenge even the most hardened driver.

And the new track is just the start. The new R-cade Extreme mode limits the amount of realism to make the game more accessible and enjoyable for everyone ranging from the beginner all the way to the most seasoned veteran. While realism is the crowning achievement in the series, (or perhaps the fact that they can get such a beautiful game to run on lower system specs) not everyone can take that real life driving, just like not everyone can be a race car driver in real life. The R-cade mode make GTR Evolution accessible to everyone whether you are a hardcore fan like me, or enjoy the thrill of racing without being bogged down too much in reality.

New cars have also been added in five different classes: three separate GT classes (pro, sport, and club,) a new class of extreme cars from the World Touring Car Championships, and a new Production Car class. While the car count of 49 might be quite limiting compared to other racers like Forza or Gran Turismo, the way each of them respond, close to the real thing, makes up for it. It’s one thing to add a new car in like some series do and its really nothing more than a new model with slightly different looks and a new paint job, and quite another to actually have accurate physics and performance for each vehicle like GTR. Every car here is perfectly accurate, so that you could probably hop into one in real life and know what to expect in terms of performance from it.

The other huge addition in GTR Evolution is more championship functionality. These new options allow full functionality of all GT cars, and can even create endurance or touring car championships. GT and WTCC cars can actually be mixed into various events. The possibilities are completely limitless.

Of course everything runs as smooth as it always has. The game is as easy to play, and still as fun as ever. Fans of the GTR series will easily feel quite at home with the impressive package. Controls are smooth as silk, while the visuals continue to impress, especially with the dynamic weather effects.

Now, a racing game truly makes you fear the arrival of dark clouds. Because it’s not just a pretty effect. The road is actually going to get slicker when the drops start to come down, which could very well happen during a long event over many hours. When you hop in your ride, you are going to pray for good weather.

And once again, this all runs smoothly on any PC. No need to pull a Crysis and spend $500 on a new graphics card. It’s amazing that a game like GTR looks so amazing and also has a great physics engine with car performance and even damage lurking under the hood. But what is really impressive is that it can run well on a modest single core desktop or laptop. Other game programmers should take note.

Evolution also features a new file sharing system, making it easier for drivers to upload or download car setups as well as ghost cars to race against or offer a challenge. And unlike most other racing games, adding new cars does not just "fill the pack." There is no pack driving here. Each driver brings their own AI to the game. Some are aggressive and some are passive, but all will offer you a challenge, just like a real person.

GTR Evolution is available in two ways: either as a standalone package including Race 07, or as a separate expansion pack. Even with the standalone coming out for $30, it truly is a great value for any racing fan.

Simbin once again drives away with a winner. It takes 4 and 1/2 GiN Gems at the checkered flag and remains one of the best racing games on the market, and probably the best for the PC.