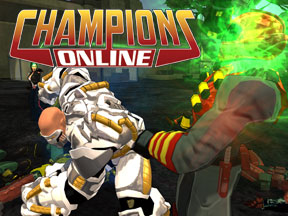 Can Champions Online Shake UP MMOs?

With more high fantasty MMOs in the market than you can shake a very big stick at, there's definitely room for a development team to step away from the elves and try something different. When it comes to the super hero thing, nobody does it better than Cryptic Studios, the original creators of ‘City of Heroes' and ‘Villains. The team is currently in the thick of trying to get ‘Champions Online' to a server near us and we caught up with them to find out just how excited we should be.

GiN: With ‘City of Heroes' Cryptic really defined the super hero MMORPG, how will ‘Champions Online' be different from the ‘City of' games?

Lena: We have learned a lot from developing City of Heroes and City of Villains but we also have a lot of folks here that have worked on other titles and, of course, we have all been influenced by other games we have played. At the end of the day we would rather talk about what Champions Online is all about rather than what it is compared to other games out there. With Champions we are going to deliver a game that has an incredible amount of customizability, action style gameplay that still retains the depth that players expect, and a wide variety of places and environments to explore.

GiN: For those that aren't familiar with the original ‘Champions' RPG, can you explain the HERO system and how closely you have stuck to the books.

GiN: Can you tell us about the ‘Champions Online' world, explain the story and how players will be involved?

Lena: The world of Champions Online is basically our world today. Well, our world today with super powers and few other alterations…like Detroit being replaced by Millennium City. There are a number of evil organizations and powerful super villains wreaking havoc but we will leave most of the details to the players to discover. One thing to mention is how the Nemesis system directly involves the players in the story. Players will be creating and customizing their personal arch nemesis. Once this threat has been identified he/she/it will be popping up throughout your career, causing trouble, and helping you write your own living story.

GiN: ‘City of Heroes' has the best character gen out there, but it sounds like ‘Champions' aims to go further. Can you tell us more about this aspect of the game? For instance, what archetypes and skills are available?

Lena: We are saving the details of the costume creator for another time but I don't think you will be disappointed. As for general character creation we have a completely classless system. A player can choose powers from any of the power sets that are available.

If you want to shoot lightning and mind control foes – fine by us. If you want to throw balls of fire and shoot shoulder mounted rockets – go for it! We want the player to be able to create the hero that they imagine.

GiN: The idea that you can control how your powers appear in-game, sounds fantastic. Can you explain how this works and what sorts of options are available?

Lena: We still have not revealed the details on this yet.

GiN: I notice that Defender also has a non-super name. Will players also be able to flesh out their non-super identity, for instance, changing out of their super hero costume and perhaps having a profession outside of being a hero?

GiN: Creating your own arch nemesis is a very exciting idea, can you explain how this is going to be implemented within the game. Will there be missions where you will fight this character and will players be able to meet each other's arch nemeses?

Lena: As I mentioned before you will be able to create and customize your nemesis. You can use the costume creator to make the exact look of your arch nemesis as well as some input into their minions. However, most details of the system are still under wraps. I will say that you will be running into your nemesis and their minions on more than one occasion.

GiN: We've seen that you're adding facial expressions to the game, what other innovations are you bringing?

Lena: You will also be able to choose your basic stance. For example, if you don't want to be the traditional arms akimbo hero you can choose a beast stance. In this stance you will run on all fours instead of a normal run.

GiN: Will the emphasis be on PvP or will there be enough for role-players too?

Lena: We still haven't released any announcements regarding PvP.

GiN: One of the major flaws I found playing the ‘City of' games was the lack of variety in the missions. They were all fairly similar and in one of a handful of backdrops, such as a warehouse or tunnels. Is this something you're conscious of and how are you going to avoid the infamous grind in ‘Champions'?

Lena: We are working hard to provide a wide variety of environments. We have already shown the snowy forests of Canada, the dry southwest Desert, and the volcanic jungles of Monster Island but there are still more incredible locations to come.

GiN: ‘Lord of the Rings Online' is an MMORPG that successfully manages to weave the players into the overall story, adding to the depth of the gameplay. How big a part does the story play in ‘Champions' and what techniques will you use to make players feel like they have an impact on the world?

Lena: Basing our game on Champions means that we have over 28 years of material that we are working with. Even more than just time this is story and characters that have been refined and playtested over on table tops across the world. We feel that the rich history of champions, the amount of customization, and features like the Nemesis system will put the player character right in the center of a deep and living story.

GiN: Following on from the previous question, how will instancing be used to vary missions and move the narrative along?

Lena: In general we are using our instances to advance the story and provide a more tailored experience. The nature of an instance is that the variables are much more defined and that allows for creating very different and more complex content than you would find in a persistent area. This makes instances ideal for delivering a strong narrative.

GiN: Looking at the available screenshots and trailers, ‘Champions' seems to have an almost cel-shaded style to it. Is ‘Champions' consciously going for a more comic book look and feel and if so how is this going to explored in the game?

Lena: We call the look comic-shading. We have the black outline but we still maintain detailed textures within that outline which is much different than you see in cel-shaded games. This combination gives us the feeling of being in a comic book but is still detailed enough to keep a players interest over long periods of time. We are already finding interesting ways of using this motif. One example we are playing with is having the color drain out as you reach the edges of the zones to simulate getting to the edge of a comic.

GiN: Can you tell us more about the different locations that will be available? How will you travel between these worlds and what kind of missions can players expect in the different areas?

Lena: The areas we have announced so far are the Canadian Wilderness, Southwest Desert, and Monster Island. So already we have mountains, snow, desert, jungle, and volcanic. There are even more exotic locales coming up! Travelling between those areas will mostly just be a matter of loading. You will not have to sit on your super jet for 10 minutes to simulate the crossing of the globe.

GiN: How will the combat for ‘Champions' work and how have you tried to make battles more interactive, rather than just a sit back and click affair?

Lena: This is something that is still ongoing and we will continue to tweak throughout the project but here are few examples of things we have done. At its most basic level our combat is based around building an Endurance bar and spending that Endurance on larger attacks. This system of building the bar instead just depleting it means that you will always have something to do – that you will never have to just sit down and wait for your bar to go up.

All characters start with a block power although you can buy additional powers to enhance it. The basic block can be used to lessen the amount of damage you take from large attacks. Paying attention and knowing when to block rewards an active player and adds a reactive element to the game. Rest assured that this isn't a twitch mechanic. The big attacks have good tells that allow a response time that is friendly to an MMO.

Another interactive element are our boosts. Whenever you defeat an opponent there is a chance that a colored orb (a boost) will pop up. These orbs will give you a quick boost to either health, damage, defence or endurance. The trick is that they pop out a certain distance away from the defeated critter so that players have to move around the battlefield to roll over them and get the benefit. This is another incentive to be actively interacting with the combat and environment.

GiN: Was ‘Champions always on the cards or is it a replacement for the Marvel Universe Online that has recently been abandoned? Have you taken any ideas that you developed for that title and put them in Champions, if so which ones?

Lena: Champions Online is its own unique game but we take ideas from everywhere. Games we have made, MMOs we have played, single player games we have played, TV shows, movies, books, history…anything. From EverQuest to Puzzle Quest. From Mansquito to Tolstoy. How else can you have a game with cowboy robots and cyborg dinosaurs?

GiN: It's hard to mention the MMO market without saying ‘World of Warcraft', what do you think is the secret of its success and how do you think ‘Champions' can win over ‘WoW' fans?

Lena: I would say making it fun is the secret to the success of most games. So, that is what we are going to do our best to do.

GiN: And one last thing, Thor versus Silver Surfer – who would win?