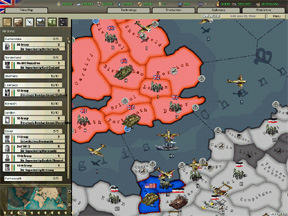 When the original Hearts of Iron came out I was simply floored. Being able to control just about every aspect of your chosen country whether that country was England or Mongolia or anything in between during World War II was pretty amazing.

It took me three days of nearly constant play to become even mildly proficient with the game, and there were times when I thought about quitting. I was after all going from a civilian to controlling every aspect of my country, so it was a steep learning curve. I was ultimately very glad I stuck with it, because the experience of maneuvering your county to and through war in both overt and subtle ways was a completely new approach to wargaming.

Even the most detailed war games mostly just concentrate on the battles themselves. With the HOI series, everything you have done leading up to a battle is likely going to be just as important or even more so than the battle itself.

The sequel to Hearts of Iron promised new gameplay elements, a better interface and improved graphics. Having gotten to play HOI2 for about a week now, I can say developer Paradox Interactive kept their promise.

The first thing you will likely notice is the improved graphics. Units look a lot more 3D now, and even cast little shadows on the map. You are still basically moving pieces around a giant map, but the improved graphics means it’s easier at a glance to see the disposition of your forces and those known forces of your enemy. You can also play with the NATO symbols for each unit if you prefer that over the 3D models.

The game has been broken down in to shorter campaigns. While you can still play the full World War II scenario from the 1930’s buildup to the final hours of 1945, this time around you don’t have to set weeks aside in your schedule to complete a game. There are now 15 battle scenarios that take place at key points during the war. Completing your objectives in a battle scenario takes between one and five hours on average. So if you need to get your strategy fix, you can do so by playing one of these shorter campaigns.

There were a few elements of the original game that just did not seem to work, or did not work well. Most notable were trade on the world market and the management of convoys. Both have been completely revamped for HOI2.

Instead of bidding for resources on the world market, you now set up trade agreements with other countries. Trade pacts can be ongoing or set to expire after a time. You won’t always get everything you are entitled to from a trade partner, but if the two of you are on friendly terms then they generally try to get you the agreed upon resource.

Convoys are fairly automatic in HOI2. The game does a great job of figuring out where you need to send convoys if you want it too. Then all you really have to do is make sure that there are enough ships in your transport pool, and enough escort craft to see them to their destination.

In fact, everything seems to be aimed at making the exhaustive management functions of your chosen country easier to handle. For airplanes and ships, you can now give them objectives like hunting enemy shipping or performing logistical strikes. This is a lot better than having to baby sit each unit. Of course the better the commander you assign to your group, the better they will carry out your individual orders.

The political and diplomacy system is also less rigid in HOI2. In the original, you could form relationships with other countries, but it kind of felt like your hands were tied in a lot of cases. The interface here has been revised and is easier to use, and you can even slowly change the political base of your chosen country, something that was theoretically possible in the first game but in practice really did not happen much.

The biggest change for you action junkies out there is the new combat system. Instead of waiting for your armies to march all the way into a new territory before fighting, you now begin the battle as soon as you hit the border. Of course if you win you still have to march into the territory to control it, but this tiny change will end up saving you hours of time just waiting for armies to arrive at a destination, especially in rough terrain where movement is slowed.

Of course a game with literally every country in the world doing their own thing is built for re-play value, but there are a few things that enhance this even further. Every now and then you will be faced with an event. These can be events with no choice, such as one of your scientists spilling his coffee and noticing that the droplet pattern on the floor is a map to nuclear fusion. You simply click "ok" and advance one level on the nuclear research table. Cool. Or it can be something like a labor dispute that requires you to make a decision. There can be both good and bad consequences whatever you decide.

There are a lot more events in HOI2, and you are almost guaranteed not to get the same ones each time you play. Even if you play a lot, you may only see each event once. They are fairly rare, and like I said there are a lot of them. So each game you play is pretty much guaranteed to be different from the last, even more so than without the events.

Multiplayer has also been improved. It is now possible for two people to share ownership of a single country. This can be a real godsend if you split up the responsibilities between yourselves. One of you could manage the political, industrial and research wings while the other fights. Just be sure that you and your co-leader are on the same page in terms of your overall objectives.

Hearts of Iron 2 takes a unique gameplay experience and enhances it further than most people expected. The end result is a grand strategy title that is fun to play, very engaging, and a bit easier to get your head around than its predecessor.

Every strategy gamer worth their salt needs to have a copy of HOI2. Compared to this title, every other strategy wargame is just a mad click fest tank rush. So if you think yourself a strategist, take up the challenge that HOI2 offers. It earns a solid 5 GiN Gems.