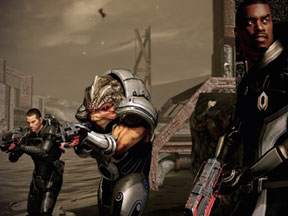 Mass Effect 2 Sets The Standard For 2010

This is a spoiler-free review for your reading pleasure!

On first impressions, much has changed between Mass Effect and Mass Effect 2. Players can now run over ammo clips and target enemies more accurately, living up to BioWare’s promise to provide something for the Modern Warfare gamer. There are medi-packs, where once there was only medi-gel which needed to be acquired or stored by breaking down other items. All in all, initial steps into Commander Shepard’s new world offers much to comfort the FPS gamer and could leave the RPG fan feeling like they’ve been left out of the cold. It takes a while to realize that this isn’t necessarily the case.

ME2 kicks off in epic style, which is exactly how it means to go on. You soon realize that this is going to be like the original and so much more besides. To say BioWare has listened to the fans is an understatement. Remember the crappy vehicle-based levels that were like driving around in a paper bag? Well, you’ll be glad to hear that they are no more. If you wanted more interaction with cast and crew – you’ve got it. And if you were baffled by the options on the skills and weapons screens, then you’ll like the new, streamlined version.

The game begins two years after the end of Mass Effect and characters and events will tie in with your decisions made the first time around, if you kept your ME1 save. The people you befriended, the ones you killed and the ones you lost in battle all fit into your new story. You are also given the chance to import your original Commander Shepard and remodel their appearance. Imported Shepards start at level two and gain bonuses, credits and paragon points, as well as a cool back story explaining away the interim years rather deftly.

Without giving too much away, the universe is in jeopardy again, despite triumphing against the geth in ME. Human colonies are disappearing and those in the know, suspect the reapers are to blame. Shepard joins Cerberus to get to the bottom of things, but the shady organization is run by an equally morally ambiguous figure called The Illusive Man, voiced by Martin Sheen and given more than a hint of Cancer Man from the X-files.

It only takes a few moments of play to realize that the action side of things has been beefed up. The familiar click of ammo being picked up as you run over it, the ability to target properly, performing head shots or knocking out a foe’s knee-cap to slow them down, all bring more of an action shooter feel to the game.

The overheat feature on weapons has been replaced with thermal clips, which must be reloaded and of course, now weapons can run out of ammo. Initially, I found this addition unnecessary at first, but ammo is fairly plentiful, so it doesn’t pose much of a handicap, strategic or otherwise. You can now pick up weapons along the way and use a research terminal on your ship to upgrade your firepower with alien technology. This is a welcome replacement of the license system used in ME – I mean, who really invested in licenses? I certainly didn’t, but I’m an avid researcher.

With the focus on combat, weapons and action, it’s easy to think that the roleplayer has been forgotten. In fact, I did just that in my early hours of play. How wrong I was. Initially, I was spitting with disgust at the simplification of the skills and how you assign points, but on further play I don’t feel that my powers or my character has been stripped back at all.

BioWare has applied the Occam’s Razor principle to ME2, or to be blunt, Keep It Simple Stupid. Rather than boggling the mind with a multitude of skill options and armor upgrades, things have been streamlined to welcome players new to ME. Although I enjoyed tinkering with my armor build, switching features in and out depending on the mission, ultimately, it just meant less time actually playing the game.

Squad points still open up more options as you level up, but the list is a shadow of its former self. Each squad member gains a special power once they become loyal to your Shepard. This is achieved by completing a personal mission for each character. BioWare deftly disguises side-missions as character development, distracting you from romping through the main plot too quickly, while rewarding you with strategic bonuses in the form of additional squad powers.

ME2 is definitely, more, bigger, better and that doesn’t just apply to guns and combat. Everything about ME2 is epic, from the cut scenes, even to the new loading scenes when landing on new planets. As sequels should, but rarely do, BioWare has added depth to the original story with more political wrangling and the odd character from the previous game cropping up in the most unexpected of places. Decisions you made in the first game have impacted on the new world order and promise to have major consequences in the last of the trilogy.

Even the ship has been given a bigger role. Now you can wander between floors, with more NPCs to talk to and help out or just eavesdrop to see how people are doing. Unfortunately, you have to use an elevator to get to different parts of the ship (for elevator also see long load times). In the captain’s cabin you can listen to a bit of music, change the appearance of your armor and even buy some pets. Hamster anyone? Or how about some fish, but don’t forget to feed them. The ship can be upgraded too, but weapons are pricey, so patience young padawan.

The Galaxy map has been expanded and you now have to refuel to zip between star systems. You can also indulge in a little mini game, which involves scanning unexplored planets and then launching probes to find minerals for upgrades. Thankfully, side missions no longer require landing on a planet and aimlessly driving around until you happen upon a mindless quest for little reward, so well done BioWare for ticking that one off your list of improvements.

Side missions are now so seamlessly integrated into the main story that you feel compelled to complete everything, just in case you miss something crucial. The quality of plotting and acting is only to be rivaled by Heavy Rain perhaps, but no game has had me torn by decisions like this one. Do you kill the merc with a heart or give them a chance to turn their life around? Save the citizens of a town or save the economic heart of the planet to help the future of the Alliance? You sit and ponder every decision because you know they will matter.

The Citadel plays less of a central part in the proceedings, as it’s still reeling from the events of ME. Now we get a host of new worlds to play with. One example is Omega, which offers a gritty Bladerunner inspired future, cast in a permanent twilight with seedy strip clubs and a dark underworld. In contrast, the Asari planet is all glittering towers and clear blue skies.

Of course these planets are populated with a vast array of beautifully created aliens, whose cultural idiosyncrasies shine through and enrich the world. As you go about your business, so does the general populous. They’re having arguments, rushing to work or discussing the political fall out of the reaper invasion. We also get rain and weather effects, which was a noticeable omission in the first game.

Mass Effect 2 is simply best in class at everything it tries to do. Once again it offers the perfect balance between action and roleplaying. Although the action feel is more obvious, the sheer scale of the story, the character development and the amount of side missions that reveal the depth of the world means there is much here for the RP fan. It’s not going to please those who like complex upgrade systems, but the game rewards in other ways on a scale beyond your wildest dreams. Despite yearning for some things as they were in the first title, the sheer scale and beauty of ME2 has won me round. It can gain nothing short of five GiN gems from me and certainly sets the standard for 2010.