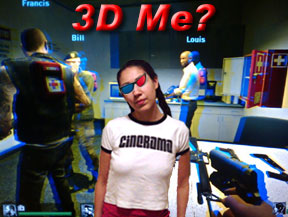 It seems like 2010 is the year that everyone goes 3D crazy, but I'm still standing by my original reservations. I must admit that the arrival of Avatar has proved that it can be done well and doesn't have to be all about sticks pointed at the screen and things being thrown at you. At least we no longer have to wear cardboard glasses and see the world in an unconvincing reddy-greeny-grey smudge. But despite recent advances, I still think 3D has some way to go to win me over and become the be-all and end-of-all of my gaming and movie-going experience.

Avatar was the first 3D movie that I had ever seen. Well, I'm not counting Jaws 3D obviously, because that would be silly. I have to say, you'd have to be fairly disingenuous to not be impressed by Cameron's vision and the quality of the 3D experience he and his team created. Rather than be jabbed and pointed at, Avatar draws you in. It's as if you're sitting on the edge of a massive window and being pulled through the world.

Even while I was watching Avatar I began to wonder how much of the wow factor was created by the 3D. The real jaw-dropping moment was when the lights go out in the forest for the first time and the bioluminescent world comes to life. Sure it's great when things float down, seemingly right in front of you, but then they stop at the bottom of the screen and you remember it's an effect. Somehow, I think that scene would have been just as beautiful and powerful in 2D. I doubt I'd have been sitting there thinking, "You know what, it's great, but there's something, something"it's just so flat."

I don't think David Lean's Lawrence of Arabia would have been any more epic as a result of the 3D treatment and it wouldn't have made Citizen Kane any more perfect or more of an iconic a piece of cinema. While George Lucas looks at flogging any life that's left in his original Star Wars Trilogy and Spielberg prepares to jump in the 3D mine-cart, I'm left feeling that it's not the revolution everyone thinks it is.

When it comes to 3D, I think gaming has more to gain than movies do. And although my first foray into 3D monitors didn't prove to be entirely successful, I still see the potential for it to be a really exciting addition to gaming.

For a start, games are interactive, which means we don't have to have an on-rails experience determined by the director. If a room is in 3D, then we can walk around every chair and every house plant, feeling the thrill of what appears to be literally walking through new environments.

Unlike movies, games are complete artifice, in so much as sometimes we can't jump and we can only interact with certain things. Everything we see in a game has been created and has never actually existed, as opposed to the real life actors, props and settings of a movie. It's this level of artifice that allows the addition of 3D seem like a bigger leap than it does with a live-action movie. And this is why I think it will bring more to gamers than it does to movie-goers.

Despite the seeming advantages for gamers, I still don't think the technology is quite there. Last year I had the opportunity to try out a 3D monitor, which was frustrating and exciting in equal measure. Well, okay, maybe a little weighted towards the frustrating.

Trick number one is making the bloody monitor work. So, imagine, if you will, you've spent $400 on a 3D monitor, plug it in, try the 3D and it doesn't work. You read the manual, try again – still very definitely 2D, only now you can't see your desktop. So you email support, they tell you how to find your desktop again, but it's only 10 solutions later that they finally tell you your graphics card needs upgrading to make the monitor work.

Let's just take a minute to think about that. So you've forked out on your monitor, only to have to spend half as much again on a new graphics card, just so you can wear sunglasses while you play a game. Now excuse me, if I balk at that prospect.

Okay, so we've got the monitor working, we're digging the sunglasses and our graphics card has all the bells and whistles. It's a-3D-gaming we shall go. And wow! Yes, Bioshock does look amazing in 3D. All the art deco statues tower above you in glorious detail, as you step over three dimensional charred remains, which bring a new level of yeesh to your body count.

However, there are flaws. The whole 3D thing, as it stands, doesn't work for some people, but the real issue comes in-game. As Bioshock is an FPS-style experience, I found that I could either have the whole environment in focus, but then my gun would be blurry, or vice versa. The trouble is that we are trying to trick highly complex pieces of kit, namely the eyes. While not all of our world is in focus all the time, we are not conscious of the foreground being blurry because our eyes are making constant micro adjustments and do it very well. 3D gaming, however, does not.

During my Bioshock experience, I opted to keep my gun in focus and have my middle distance slightly out because it was horrible trying to operate using a blurry wrench. And although it was great walking towards 3D flames and stepping over things, I did feel a strain on my eyes. They were constantly trying to fix all the blurry bits, but failing. Consequently, a couple of hours playing left my eyes feeling a little tired. Does it damage your eyes? I don't know, but what I do know is that it's a less than satisfactory experience at the moment.

One day, I'm sure it'll be more than a gimmick, but that day has not yet come.

Most wanted: Heavy Rain to come to the 360