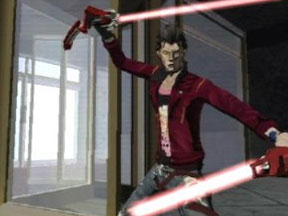 It's about as close to controlled chaos as possible

No More Heroes 2: Desperate Struggle is a game that ponders too much on fart jokes and sexual innuendos, making it funny for all the right reasons, but thoughtful for all the wrong ones (which is an accomplishment in itself). But chiseling away at these feats are less-than-pliable control schemes and exhaustively repetitive sound patterns, among a few other flaws.

The saddest part about the No More Heroes line is that I really want to like it. The style and basic idea of the games immediately catch my attention, but there are certain elements that keep me from being a satisfied customer. Story-wise, the series takes itself to such a strong extreme that it can’t help but turn heads, which has both potential pitfalls and lifts to glory. As for the gameplay, however, the smallest technical issues in the main story modes keep No More Heroes from being a solid piece of work.

As a sequel, No More Heroes 2 proves to be as true to the definition of the term as possible. In this second installment, Grasshopper Manufacture have done away with characteristics of the first game that proved burdensome-such as the sandbox world structure and the entry fee for ranking matches-and spent a good deal of time on further developing the overall theme of the series, which is as close to controlled chaos as a game can get without becoming totally unintelligible.

In the latest installment, we have the return of Travis Touchdown to the UAA, an organization that hosts a ranking tournament for the world’s top assassins. Last time around, Travis fought his way to the top for the champion title, but after the events of the first game, the world-class killer vanished from the limelight, leaving many to speculate on even the truth of his very existence.

Now, with his best friend brutally murdered by unknown assailants at the game’s opening, the bad-mouthed champion makes it his duty to cut through all who stand in his way of finding answers and attaining revenge.

As straightforward as that plot seems, the details that make No More Heroes so striking take the clichÃƒÂ©s of Japanese pop culture and set them to maximum levels in order to create the absurdist setting of Santa Destroy. Everything from professional wrestling to beam katanas to bulky and overly complex motorcycles are on display in Santa Destroy, making it a location fueled by juvenile fantasies and slim logic.

This aspect to the game is probably the most attractive feature for potential gamers; however, the overall ability to keep a player’s interest is where No More Heroes finds its main struggle.

For the main missions, gamers will likely find the run-and-gun approach to their liking at first, but the repetition of sound effects and button-masher fighting options found in the game throughout would wear down even the staunchest of No More Heroes supporters. This is broken up in the sequel, as players are eventually given four beam katana options to choose from and a section of the game enables control of the character Shinobu (Travis’s unwanted apprentice), but these additions only mask the problems of the game by so much.

[Note: Granted, the underlying problem comes from the limitations of the Wii itself, to the extent that the game’s lead designer has mentioned that another No More Heroes title wouldn’t come out until Nintendo released its next console. With that in mind, the achievements of this series are phenomenal, but if we are rating this game on a degree of quality gameplay, there are unavoidable issues.]

Despite these pitfalls of the main mission gameplay, No More Heroes 2 has been able to add another dimension to the world of Santa Destroy through its selection of mini-games, which are made in the retro fashion of 8-bit adventures and tasks. An innovative way to add both humor and theme to the game, these moneymaking ventures are little more than a distraction to the overall title, but help to make No More Heroes 2 even quirkier than its predecessor.

It’s a mixed blessing, but definitely worth a rent. After that, you can decide for yourself if No More Heroes 2 is a good fit for your Wii library or just another title for the game store shelves.