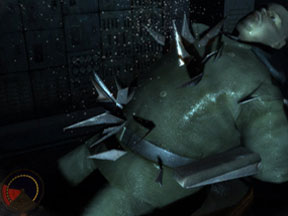 Cryostasis is a game with a lot going for it, and quite a few flaws as well. Kudos has to go to Russian developer Action Forms for trying to make a unique game the likes of which American gamers have probably never experienced before. And when they stick to their unique formula, the game is quite good. Unfortunately, when they add a lot of "traditional" elements into the game, like boss battles, the wheels kind of fall off. Cryostasis is still a good game, but it could have been so much better if it emphasized its positive traits instead of constantly calling attention to its flaws.

The plot of the game is quite good, with a rich story centering on the doomed ice breaker North Wind, a ship that has been stuck in the ice for many years. Most of its crew died and the hull has been left as a well preserved and silent grave of fallen sailors, only the dead aren’t so quiet, as you will soon find out.

You play a meteorologist who is assigned to a North Pole station called Pole 21. But you never make it there. An accident on your dog sled forces you to take refuge inside the North Wind before you freeze to death. This begins your adventures inside the belly of the steel beast.

Thankfully for you, because the ship is nuclear, it still has some power. You will need to turn on lamps and heaters along the way, because how warm you are determines your health. When you take damage, you lose heat. If you want to "heal" you need to cup your hands around an active heat source which can be anything from a burning pile of boards to a hot piece of machinery. This is pretty unique and is quite good in a game set in the North Pole. Some levels are set outside the ship, and you can literally freeze to death just walking around unless you find a little closet with a working light bulb or some semblance of warmth.

As you travel around the ship, you will come across dead sailors. Sometimes you can tell how they died, if they have a pile or debris on them, or are encased in ice, indicating that they drowned when it was still water. Many of them will be glowing red. When you touch them, you actually enter the past as that sailor and can play the last few minutes of their life. If you die, you simply come back to the present and the dead sailor is still there, but you can try again as much as you like. If you can figure out why they died and correct their fatal mistake, then when you come back to the present, they will be gone along with, normally, some obstacle that was preventing you from progressing forward in the present. This is an amazing concept and is quite interesting. Also, you get the feeling that you are actually changing the fate of the sailors and the ship. If you save enough people in the past, who knows what can happen in the present?

These trips into the past provide a heck of a lot of variety in Cryostasis. You will find yourself in a life boat trying to kick zombies that are crawling inside, walking through a kitchen loaded with starving dogs, underwater in a diving suit, fixing reactor problems as a technician, helping to launch a helicopter and even playing as a polar bear trying to outwit hunters.

This past altering ability is called Mental Echo, and really makes the game stand out. As an example, in one area you will bump up against a side of beef and suddenly begin playing as a cow being slaughtered for dinner. Later on, when you find a dead sailor crushed by fallen flanks of beef, you can play as that sailor and instead of killing the cows, let them all go free, hence there are no heavy cow carcasses to crush him later on. Then neither the cow nor the sailor dies, which also makes the present day a little easier for you.

Some of these flashbacks involve puzzle solving, which is a lot of fun. You will find yourself in a machine shop making a part to fix the fire suppression system, as deadly smoke rolls into the workshop for example. Or, you might have to learn how to work a crane to pull debris out of your way. It’s all very cool stuff.

Unfortunately, where Cryostasis fails is when it tries to become a shooter, which given the first person interface, I suppose they had to try. You see, not all of the crew is completely dead. Many of them have turned into some sort of ice zombies. They will claw at you or even shoot at you, only when they hit they steal your heat. Lose enough heat and you will die. So finding a source of heat to recharge yourself after a battle is of paramount importance. But as a shooter, the game is pretty weak. Your character does not move quickly enough. It’s almost like he is under water compared to the monsters you face. They are flipping around like ninjas, and you are dragging your feet, taking a shot, slowly pulling back the bolt on your rifle, or taking close to 10 full seconds to reload, bullet by bullet. You just want to slap your character and tell him to wake up, or to stop hitting the vodka between levels.

And Cryostasis is missing a lot of elements that it would need to be a good shooter. Monsters take the same amount of shots to kill whether you hit them in the head or the hand for instance. I killed several monsters by constantly shooting an exposed foot or hand when their poor AI got them hung up on the environment. And if it took three shots for that to happen, when I took careful headshots, it was exactly the same.

There is no stealth interface, which seems odd for a game that takes place in half light and shadows. Monsters will see you whether you are crouched in a dark corner or standing in front of a spotlight.

Also, there are no real terrain advantages. In one fight I was battling a creature that was low to the ground in a room full of tables. So I figured I would jump onto the tables to get a height advantage, plus get out of range of its melee attack. No dice. The tables have an invisible wall around the top of them to keep you from getting up there. That’s just weak. In fact, in most boss battles, you are given almost no terrain features. It’s just you and the boss in a closed room slugging it out. And remember, they have all the advantages since you move too slowly. Almost all the minor fights are the same way, plus the monsters seem to spawn anywhere they please, even in areas you have already cleared out.

The weapon selection in the game also is a little sparse. For most of the game you will have a five shot rifle that takes way too long to reload. I was overjoyed to find a 10-shot semi-automatic rifle, but it shoots slow too! You should be able to fire as fast as you can pull the trigger, but there is a pause between shots. Eventually you can get a PPSh-41, the quintessential Russian sub-machinegun, but even then, it seems underpowered, taking almost a full clip to destroy a zombie enemy.

In fact, I think Cryostasis would have been a much better game if 90 percent of the combat (and all the boss battles) were removed from it all together, and perhaps replaced with some more of the ingenious puzzles and story elements. There needs to be a few monsters to keep you on your toes, to make it a real horror survival title. But the constant battles, especially near the end of the game, only serve to pull you away from the rich story and to remind you that the shooter interface is just not up to par with most modern titles. Had Cryostasis only been a shooter, if that is all that it had to offer, it would be perhaps a 2 Gem title at best. The shooter elements are that bad.

But Cryostasis is so much more than that. It’s packed with so many cool events of the type that gamers will remember for years to come, that it’s more than worth playing. My favorite one took place in a broken movie theater. You travel into the past to fix the projector and load it with film. Then in the present you can flip a switch to play the movie from inside the theater. I actually was getting ready to sit down in one of the comfy chairs to watch. Then a zombie came onto the screen and I was thinking that perhaps the sailors were studying their enemy, like a military film. The zombie on screen started shooting and I realized that I was taking damage. I jumped up and started shooting back at the screen, killing the zombies in the movie. It was so cool and totally unexpected. That’s how Cryostasis should have handled most of the shooter elements, in unique and fun ways.

And I don’t want to give anything away, but the game actually has a bit of a twist ending. I can normally see these things coming a mile away, but somehow didn’t figure this one out. And I have to say that it’s one of the cleverest and satisfying endings to a game that I’ve experienced in a long time, even though the developers tried to mess it up with another ridiculous boss combat. The ending will make you feel really good about playing the game and give you a real sense of accomplishment. And it dovetails perfectly with the rest of the story. It might even want to make you play the game again.

Value wise, Cryostasis is really near the top of the scoring rung. I played the game for about eight hours from start to finish, and am itching to go through it again.