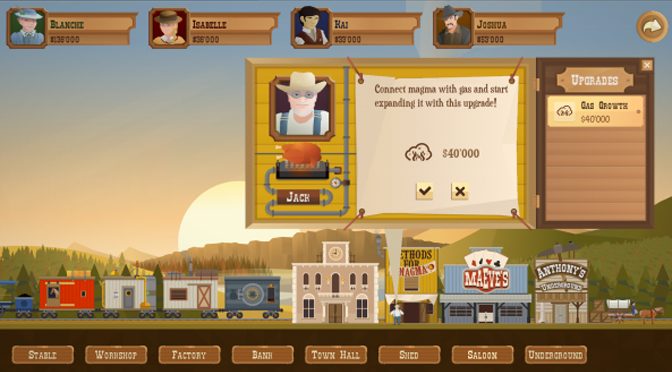 Gamious, a small Dutch game developer, is pleased to announce the release of Turmoil: The Heat is On, DLC to be released on Steam today, March 21st, for $4.99.

Turmoil is a strategic simulation game set during the 19th-century oil rush in North America. Players fill the shoes of an oil entrepreneur by prospecting, mining and selling oil. As the oil town grows up around them, they can outbid their competitors for town shares and become the new mayor.

Since launching on Steam Early Access, Turmoil has shipped hundreds of thousands of units. The game has evolved and grown well beyond its originally anticipated scope thanks to community feedback and enthusiasm. It has become a go-to game of many of the world’s leading Youtubers (like JackSepticEye), resulting in thousands of Let’s Plays on YouTube and Twitch for their subscribers to feast on.

Jos Bouman, Creative Director, “March 21st will be the date to check out the new DLC, “The Heat is On.” We have been working constantly on new ideas and features. Not only to extend the enjoyment of Turmoil, but to make the game even more intuitive and immersive. We have certainly learned a lot from the original game, and the DLC marks a big shift forward, which is apparent from the moment you start playing. Turmoil has easy to understand mechanics, for both novice and expert players, with many layers of game challenges to offer hours of gameplay”.

Turmoil – The Heat Is On is a brand-new campaign with tons of oil to dig up and convert into cash! It is designed to make you feel right at home, but at the same time offering lots of new mechanics and fun features.

For the ardent Turmoil fan one important aspect picked up and improved on was that players never used natural gas to its full potential. Now this element has been simplified, making things even more compulsive, but experienced players should however not be afraid that the game has become less challenging. Playing the drilling game is still all about making smart decisions under time pressure, especially in the final area!