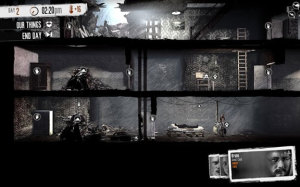 This War of Mine: The Little Ones DLC Lands Today on Steam and Games Republic.

The biggest expansion to This War of Mine (over 100 awards, including IGF and SXSW Festival Award) explores the hardships of wartime survival as seen from an entirely new perspective ― that of a child. This DLC puts you in charge of a group of adults and children stuck in a besieged city, struggling with basic necessities. This War of Mine: The Little Ones focuses not only on the reality of enduring war, but also on how even in times of conflict, kids are still kids: they laugh, cry, play, and see the world differently. In addition to thinking about survival, you’ll have to summon your inner child to understand how to protect the little ones.

From the beginning, 11 bit studios has invited the gaming community to raise funds for War Child, which helps kids suffering from wars all around the globe. To date, gamers all around the world have raised an incredible amount of over $137.000 for War Child, and it’s still growing. The Little Ones DLC is a part of this initiative as well – $1 from each purchase goes to War Child.