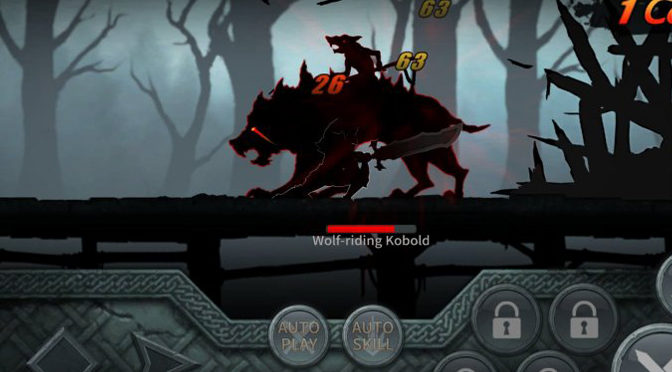 This week I’m here to talk to you about a mobile game I discovered called Dark Sword.

Dark Sword is a 2D hack-n-slash game with elements of an RPG added in. The game has players slashing through monsters across various levels as they attempt to reach and defeat the Dark Dragon. This big baddie sucked light from the world and left everyone as a shadowed form of their former selves.

That sounds really familiar doesn’t it. Almost as if another game that became widely popular has a similar backdrop. Well, it’s really no secret that Dark Sword is riding on Dark Souls’ coattails as hard as it can. The game’s official description even includes the text “May the light shine upon you!” Praise the sun, anybody? Let’s also not forget that its title is very similar to Dark Souls and it abbreviates itself as “DS.”

So, we basically have a game that’s claiming to be a 2D version of Dark Souls. Well, that’s not really the case. Anyone whose played Dark Souls knows that it’s a bit slow in terms of combat. Dark Sword is different. It’s combat is much more fast paced. However, it does feature a dodge button, which is a great way to avoid damage.

There is a good bit of armor, weapons and accessories that can be found when playing through Dark Sword. Players will pick them up after defeating different enemies and each one comes with random stats. It’s in the players best interest to chose a build and try to collect armor that meshes well with it. Once this is done, gold can be spent to level the equipment up and make it more powerful. Unfortunately, the sword is the only weapon type, which means that combat can get pretty dual after a few areas. However, different swords will have different skills, which helps fight off boredom a little bit.

Let’s talk about the negatives of Dark Sword. First of all, it’s a mobile game and that means that there are microtransactions. This is about the only way to get really good gear and while players can save up souls (another similarity to Dark Souls. *gasp*) to draw for random pieces, it still takes a good bit of time. There are ways to get gold and souls for free, but it requires watching ads or completing promotional offers. Neither is really a good option, but at least this is the only way that the game tries to force ads on the players. Players can also get pets in the game, but these suckers take five days to unlock without using any form of currency, so screw that. There’s also stamina that is consumed. Yet again, ads and money get this back quicker, but waiting for ridiculous periods of time also brings it back. Another negative is that stamina doesn’t restore upon a level up, which is a standard feature among mobile games.

The art direction in Dark Sword isn’t bad. The characters and all the enemies in the game are just shadows with outlines, but this works well with its story and they stick out from the backgrounds. However, I can’t help but think that this was done out of laziness as its main focus seems to be cashing in on the Dark Souls similarities.

The audio in the game isn’t really worth the player’s time. You’ll hear some generic battle music and loads of grunts from your character. It’s not all that grand and definitely not worth keeping your volume up for.

Overall, Dark Sword isn’t actually a bad game. It has plenty of bad things about it and the Dark Soul copying is more than blatantly obvious, but its works well mechanically. It’s worth the download and is one of the few enjoyable mobile games out there that won’t take up a gigabyte of storage on your smartphone, but just don’t expect anything groundbreaking.