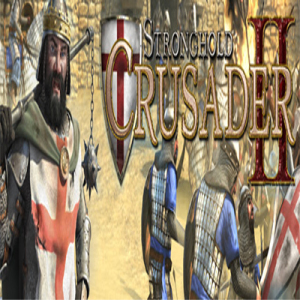 Fans of the classic castle building series can now return to the deserts of the Middle East circa 1189 in Stronghold Crusader 2, with the game out now on Steam. A new launch trailer has been released to mark the occasion, showing the developers battling it out in online multiplayer:

After two years of development Stronghold Crusader 2 is now available. Looking back on the game’s development, the team posted a thank you message on the official website:

“Thank you for supporting us and making Stronghold Crusader 2 possible. This is our first ever independently developed and funded Stronghold game, built with your encouragement, feedback and support over the past two years. It is far from the end for Crusader 2, with content updates, DLC and patches all planned to follow in the weeks and months after launch, but it gives us great pleasure to say that the game is now available on Steam!

Just like you some of us, having worked on Stronghold Crusader back in 2002, have been waiting for this moment for over twelve years. From the very first day of development it has been an honour to work on this project and we hope Crusader 2 meets your expectations as fans of the first game and the series as a whole.

If you enjoyed spending long nights fending off fiendish AI opponents and friends in the original, Crusader 2 will provide you with everything you need to relive those memories. With two campaigns, six skirmish trails, eight AI characters, co-op, a map editor, free build mode and a selection of multiplayer maps, Crusader 2 delivers the long-lasting challenge you expect from a Stronghold game. We can’t wait for you to try it out.”