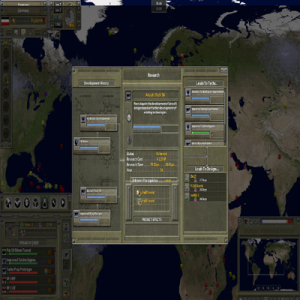 BattleGoat Studios is delighted to announce the Steam Early Access Beta launch of their upcoming Real Time Geopolitical Strategy/Wargame, Supreme Ruler Ultimate.  Lead Designer and Co-Founder David Thompson commented, “We’ve been working towards this for fourteen years!  Supreme Ruler Ultimate is the culmination of all the design revisions and content we’ve created since forming the studio in 2000.  And it’s now time to involve our players in the final stage of development through Steam’s Early Access which will help provide the player testing and the feedback necessary to make sure Supreme Ruler Ultimate is everything that strategy gaming fans expect.”

Thompson went on to explain how the new game follows up the successful release of Supreme Ruler 1936 earlier this year: “Supreme Ruler Ultimate incorporates the content from our recent World War II version as well as our other past releases while expanding and enhancing the game features previously released.  Anyone who purchased Supreme Ruler 1936 has been provided a 33 percent discount coupon via Steam towards Ultimate.”

Supreme Ruler Ultimate is expected to be released October 17, 2014, and will be available for PC and Mac through Steam and other vendors.

The pinnacle of fourteen years of development on the Supreme Ruler series of Real Time Geo-Political Military Strategy Games for PC and Mac.  Supreme Ruler Ultimate incorporates the stories, campaigns, scenarios, and features from previous releases and expands on them in an improved game engine.  Take control of any nation in the world from World War II through the Cold War and into the near future as our world lurches from one crisis to the next!  Play historical or modern campaigns with specific objectives, attempt one of the many Set-Piece Scenarios for a shorter game, or customize your gaming experience by picking any nation in the various era sandboxes and choosing your own preferred Victory Condition.  With so many options to choose from, Supreme Ruler Ultimate provides virtually unlimited replayability!