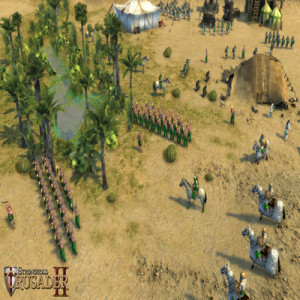 A new E3 gameplay trailer has just been released for Stronghold Crusader 2, the upcoming ‘castle sim’ sequel from Firefly Studios. With the game currently in beta and on show to press, this new trailer spotlights the core features that set Crusader 2 apart from the original:

With less than three months to go before Stronghold Crusader 2 releases on Steam on September 2nd 2014, the small team at Firefly is thrilled to have entered beta with plenty of time remaining for polish and balancing. In a new developer blog post on the company’s official website Firefly talks in detail about new features, the state of development and how self-publishing Crusader 2 has made for a better game.

“The game is essentially finished with all our core systems in place including co-op, unit abilities and dynamic events like the tornado and locust swarm. Self-publishing comes with its own set of challenges but one of the great advantages is that we can release when we are ready, when the bugs have been squashed and the game is worthy of the Crusader name. After taking the game to several public shows over the past nine months we are very happy with the game’s feel. The team has been tweaking areas of gameplay such as unit balance and castle destruction in direct response to feedback received at these shows and it has made a huge difference. Players are telling us it feels like the original Crusader in terms of moment-to-moment gameplay and just hearing that is hugely encouraging.

The whole team feels as though we have managed to make a game that expands on the original Crusader without changing what people found so enjoyable about the original. It is mission accomplished on that front and we still have time for a lengthy beta period to polish everything off before launch. Having to be so vague about our release date, at least until recently, was frustrating but we only wanted to give a specific date once we knew the game would be finished and up to the kind of standard players expect. Soon there will be a great Stronghold game available on Steam, one we can’t wait to get into the hands of players.”