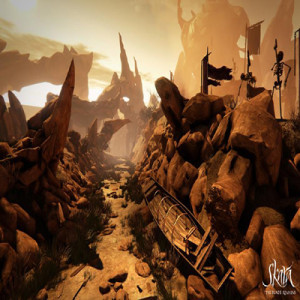 In its Early Access form, Skara will cost pioneering gamers, £12.00/$19.00/€15.00 and will feature two vs. two battles, two game modes (‘Team Death-match’ and ‘Free For All’), one arena and one playable character. Constant updates and expansions are planned for every two weeks following the Steam launch with a dedicated forum set up in which early adopters can specifically contribute to the Early Access stages of development via votes and comments.

“We advise gamers to only purchase the Early Access version of our game if they truly understand what Early Access means”, commented Pablo Rodriguez, Creative Director at 8-Bit. “We want our audience to participate in the creative process of building Skara with us and we’re excited at how far we’ve already come. We acknowledge that we still have a way to go, but we also want people to join us on our development journey as we move towards full scale release”.

Early purchasers will ultimately have their up front payment refunded in virtual currency which they will be able to spend in the virtual store once it goes live at full launch. They will also be rewarded with exclusive armor, weapons and have their names featured in the game credits. 8-Bit are charging a nominal fee for the early access version to help with development costs, the final version which will be F2P on XboxOne, PS4 and PC, is due to release in 2015.