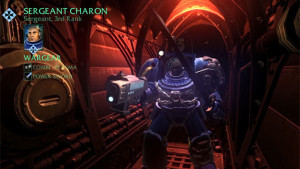 Based on the best-selling board game set within the Warhammer 40,000 universe, Space Hulk: Ascension, is a 3D digital turn based strategy game, that features reworked mechanics and a host of new features, including RPG progression mechanics, new Genestealer variations, new rules, and mission structures.

“Players are going to love the new options afforded to them by the Salamanders chapter.” said Thomas Hentschel Lund, CEO of Full Control. “Their lethal Heavy Flamers and resistance to fire are a deadly combination for the Genestealers to contend with!”

Featuring over 30 hours content, Space Hulk: Ascension – Salamanders is turn-based strategy at its finest. The Salamanders board the Space Hulk – Virtue of Hatred – to find priceless pages from the Tome of Fire… or wreak revenge on any who have dared despoil them. Featuring new gameplay hooks to the story missions, in the Salamanders Expansion players will face environmental challenges as well as an onslaught of hordes of predatory, alien Genestealers.

The Salamanders bring new abilities to the table, as players can now have two Heavy Class Terminators in a squad, each with the option of having a Heavy Flamer to boot. The Salamanders also have an extra Flamer pattern too, and can walk unharmed through flames, as well as some new ferocious pyromantic psychic powers.