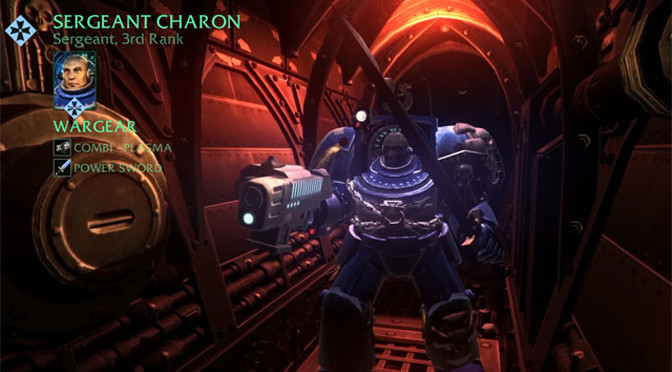 Hello everyone. My name is Vincent Mahoney. (This is the part where you say, “Hi, Vincent!”)

I have a confession to make: I have never played Warhammer 40k’s board games, nor have I much experience with the various games on which the Warhammer 40,000 label exists. Whether by oversight, ignorance or passing fancy, I can simply only say… waiting this long was a huge mistake.

Space Hulk was originally a board game released in the late 1980s that is set on abandoned space crafts and asteroids. It is on this very sci-fi battleground that the Space Marines and Genestealers do battle. Space Marines, called Terminators, are genetically modified super soldiers (stop thinking about Captain America, he’s not in this game), while the Genestealers are an alien race of creatures that are more than capable of rending squishy humans made of fleshy parts into… multiple fleshy bits. Seriously, the Genestealers get these execution animations they do when they finally get to kill one of your Terminators- sometimes they are as fascinating as they are brutal.

The story to Space Hulk Ascension doesn’t seem to be the focal point of this title. Missions are laid out in plain text with brief explanations of the goings on, but the narrative is largely forgettable since there’s no presentation of tragedy, drama, etc. Those in search of substantial storytelling would want to look elsewhere, though the kinds of people who enjoy strategy gameplay without any fluff (such as a caricature of Albert Einstein giving players missions in Command and Conquer: Red Alert) will have a lot to enjoy in this game.

Space Hulk Ascension plays a lot like XCOM in that it’s a top-down turn based strategy game: You control a squad of units and move them across a fog of war-covered map. You utilize a pool of action points to move Terminators across the field, acquire and take down targets, reload and so forth. You can set a character on overwatch, as well, which will have them fire at foes that move through their line of sight even when it’s not their turn- similar to XCOM’s overwatch or Valkyria Chronicles.

Progressing through a stage requires careful balance of managing some weapons, as those such as the Stormbolter may jam if fired too many times and overheat. Reloading is also a concern, as of course running out of ammo in the magazine is one of the worst things to happen when a Genestealer rounds the corner and stares its ugly mug directly at your favorite character.

Customization is one of many things players have access to in Space Hulk Ascension. My particular experience involved renaming Terminators to the names of characters from Red vs Blue, though it was pretty sad when Grif got torn apart by a hail of claws and then almost immediately thereafter Sarge was subsequently killed, as well (though he died just how he wished: After Grif). There is a lot more than that, however, as characters can level and acquire skills that will allow them to move further, gain increased hit percentage, etc., which will make it hurt all the more when your guy with the highest movement dies on a Hard difficulty run (mine was Grif. He was always the best at running away… except for that one time).

Those familiar with both real time and turn based strategy most likely have heard of the phrase Fog of War, in which a layer of difficulty is added by making unexplored areas of a map dark or foggy, concealing enemies and obfuscating longterm strategy. Commonly players will have to be vigilant in moving the Terminators as a group, moving only a few tiles at a time so as to constantly cover their flanks because the enemies are like Alien and sometimes seem to just pop out of nowhere for an ambush attack that can may very well eliminate one of your characters.

Fog of war is very, very common in Space Hulk Ascension, with most stages being extremely dark as the areas that are revealed brightest are the directions in which your characters are currently looking. Your objectives show up on the map, but practically nothing else does until a Marine is able to reach it and look at it with their own eyes.

Of course, everything mentioned so far being included, it’d be a shame if the game didn’t have enough stages to truly let players stretch their tactical legs, right? Thankfully, Space Hulk Ascension does feature a multi-branch campaign with at least 100 missions that will push your strategic thinking (and patience, sometimes) to its limits. The campaign will push your abilities to recognize, calculate and respond to risk as well as test your preparation, since there are even different weapons that can produce a significant tactical advantage for the player. Multiple aliens in a corridor can be eliminated in one shot of the heavy’s flamethrower, for example, but the fact that you have limited shots with it may be too high of a liability on some maps, or require special care to work around. This isn’t withstanding that there are three Terminator factions in the base game, each with their own slight benefits, and multiple difficulty levels to open the game up to more than just hardcore fans of the board game since on the easiest difficulty your characters don’t suffer from perma-death (and on Hard, your replacement Terminators aren’t even of the same level as the ones that died).

Graphically speaking, Space Hulk Ascension looks okay. It is by no means pretty, and while it also isn’t ugly it does seem to have very little going on the aesthetics department. The textures are generally simple and best viewed at a distance, rather than up close and personal. The character models also seem to get the job done but they aren’t exactly anything you’d write your Congressman about (or Parliament members depending upon where you are. I have no idea what countries frequent this site). The real visually pleasing moments come not from the textures or polygonal models, however, but in the flickering hall lights in the derelict vessel, or the visage of a hallway seemingly painted with alien innards. The special effects of Space Hulk Ascension really bring the claustrophobic atmosphere to life. There’s very little music to speak of, though, with much of the in-game sound being dedicated to the varying sounds of the space vessels you’re trekking through or the shrieking cries of Genestealers and Broodlords. As it stands now, there’s no atmospheric music while in-game, though the menu does have a pretty nice theme.

The UI, similarly, is also less than impressive. Sometimes you may accidentally change the direction in which a Terminator is facing rather than reloading, which can be extremely frustrating during a crucial moment, because the user interface is nothing but left mouse clicks with right click to cancel. A few hotkeys for various actions players will use at great length would go a long way in avoiding these kinds of issues, but there isn’t a hotkey for reload, cooldown weapon or anything of that nature yet.

Space Hulk Ascension is a special kind of slow gameplay: Players will spend multiple turns very slowly making progress across a map to an objective, turn after turn seeing practically nothing. However, it is a special kind of rewarding when you activate overwatch on a whim and suddenly five or six of the alien menaces jump out at your crew from a darkened section of map, the darkness bursting into clouds of red as each foe is mowed down before it even comes around to your turn. Frustration, slow and rewarding seem to be the three words that come to mind most regarding Space Hulk Ascension: As a tactical game, there is quite a lot of content to enjoy and could be a great game for someone who strongly appreciates this type of game.

To summarize, while Space Hulk Ascension is seemingly rough around the edges, it is also a blast to play as making the right call on your turn while facing a number of hulking enemy Broodlords is an interesting rush. Fans of games such as XCOM or Jagged Alliance should at least give Space Hulk Ascension a shot, as it has a significant amount of content, continued progression and a very similar style of play to those great games.