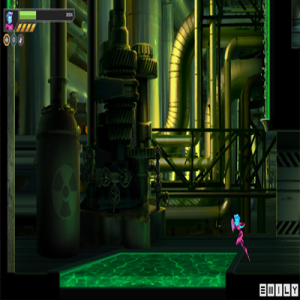 Pixel Worm, LLC a newly formed indie development studio packed with talent, today announced its flagship title, EMILY — a hand-animated 2D-action platformer with an emphasis on open exploration. Set in a futuristic and decayed world, EMILY follows a genetically-enhanced teenage girl as she struggles to hang on to her humanity on a quest to save her father.

Currently being developed for PC, and anticipated to arrive on Steam before heading to other platforms, EMILY features a compelling and unexpected storyline with memorable characters, engaging Metroidvania-style gameplay, larger-than-life boss battles, gorgeous artwork, integrated controller support, and more. EMILY is professionally hand-drawn and animated, incorporating talent from veteran illustrators such as Mark Ferrari, whose work includes the classic title The Secret of Monkey Island.

“In the year 2160, overpopulation has ravaged the planet. Despite a vicious pandemic now massacring millions, shadow-government, LibertyCorp has halted all research for a cure, with basic human rights such as healthcare reserved only for the elite. Amidst the chaos, Emily’s father, a prominent medical researcher, pioneered an untested nanobot-based formula believed to be the solution to the outbreak. Not one to be defied, LibertyCorp immediately retaliated, infecting Emily with the deadly Adenovirus. But before his imprisonment, Emily’s father attempted to save his daughter with his untested concoction. Without a chance to react the nanobots malfunctioned, transmogrifying her body into a metallic, mechanical substance. Now alone and without memory, Emily must delve into the unknown to remember her past and save her father…”