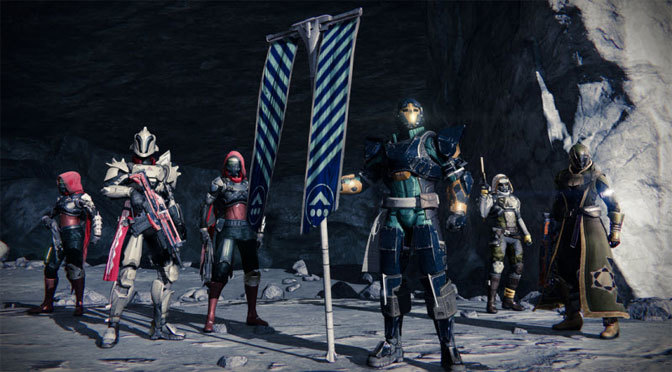 One of the most anticipated games of the past several years is finally out, as Destiny rolls onto consoles everywhere. And yes, despite a few flaws, this is one shooter that is more than worth your time. And unlike other shooters, gameplay in Destiny can quite literally last forever, or as long as Bungie keeps making new content and letting us visit more and more planets and moons as we slowly retake the solar system from The Darkness.

The plot of the game is interesting, and set up in such a way as to provide an ingenious background for a variety of adventures. Human society evolved rapidly and took to the stars thanks to the help of a giant sphere called The Traveler. This golden age lasted for thousands of years. However, The Traveler had an enemy known as The Darkness. One does wonder why The Traveler never mentioned the fact that he had a huge army of monstrous bad guys tailing him. Would humanity have said, thanks, but no thanks to all the technological gifts? Probably not, but it would have been nice to get a little warning.

In any case, humanity advanced far faster that we ever would have without it. Every planet in the solar system was colonized and human life expectancy tripled. Of course, once The Darkness came calling, it all fell apart much more quickly than it was built up.  Now you are left with one safe city on Earth and have to fight to slowly take back everything else, or at least survive for another day.

Once you get past the first few story missions, you will own a jumpship that can fly to different worlds or moons. Mars is mostly a ruin. Mercury is an industrial wasteland with lots of environmental dangers. Venus is like a giant shopping mall. That’s a lot of different environments to explore and fight over. And Bungie can add more planets quite easily, giving players even more places to explore. That’s pretty insightful game design that marries the endless world of an MMO with the more traditional run and gun aspects of shooters.

In terms of gameplay, I don’t normally enjoy First Person Shooter games; in fact since they are usually so focused on the PvP aspect of multiplayer I usually stop playing them after a few weeks. I prefer cooperative multiplayer, and Destiny delivers that with its seamless matchmaking in the open world areas of the game flawlessly. I’ve felt properly bad ass as I’ve tackled each of the story missions by myself, at lower than suggested levels sometimes, and I really enjoy the narrative of the story. That being said it’s not as gripping as a game like Bioshock Infinite, where I was always wondering what happens next. There can be improvements on the story in the expansions and sequels to this game, and I hope they take the time to improve it.

While the single player missions are fun, so are the multiplayer strikes, which generally are much more difficult and need to be accomplished with other players. Here again the cooperative multiplayer aspects of Destiny comes into play once again. So far, I’ve only done two and a half strikes, the half being one where I was brought into a group as it was fighting the last boss – I suppose their third person dropped out for some reason. Even so, I still enjoyed them immensely. I do think that it’s better to do them with a group of friends, but since mine aren’t at my level I’ve been using the random matchmaking. That works very well, pulling together from the thousands of players who are also looking to group. I’ve never had to wait long for group missions, whether a strike or in the actual multiplayer competitive part of the game, which is thankfully partitioned away from everything else.

That being said I have one issue with the game, and it’s really not the game’s fault I think. It actually caused me to break my R2 button three times, once in the Alpha, Beta, and then full release of the game. It may have to do with the fact that I’m hard on my controllers in shooters, but if I can play Halo 4 multiplayer using the DMR exclusively without breaking the 360’s right trigger, I shouldn’t have an issue in Destiny where three of four primary weapons are single shot  models, or a burst fire weapon that’s effectiveness is determined by how fast you use that trigger. Perhaps this means that I am more into the game than other titles, making the controller suffer because of it.

In terms of graphics, Destiny is absolutely stunning on the PlayStation 4, the system I played it on. And while it’s not as gory as Bungie’s previous games, that doesn’t even diminish the bad ass feeling of destroying enemies with your super abilities, which are all visually stunning. Each class has their own distinct feel and other than in the Tower, where your helms, and if you are a Hunter your cloak’s hood, is taken off you can easily tell who is what class fairly easily. I’ve only experienced one visual bug so far, and it seemed to be a clipping issue with the Hunter’s cloak if you stood in a certain way.

Music here completes the package. It’s quite a rousing score that has been put together to compliment the gameplay. In fact it’s probably my favorite music of a shooter game series since the original Halo’s theme song. It turns tense when you walk into a dark area and makes you wonder if there’s something that’s about to come and tear out your spine from behind. It turns heroic as you take on big bosses that loom over you and your companions. That being said, I’ve listened to the theme song by Paul McCartney and it’s kind of silly, but still fun.

The voice acting is top notch as well. Peter Dinklage from Game of Thrones fame is really good as your constant companion, or Ghost, giving you advice that is sometimes snarky and sometimes condescending, just like we got used to from Thrones. Our favorite quote from him has got to be “Not to alarm you, but I’m tracking the sword by the light of all the Guardians that’s its killed.” Um. Okay. Thanks for that. Following him is a highlight of the game for sure.

Other quality actors take on support roles too. Lance Reddick provides his deep, authoritative commanding voice as Commander Zavala, one of the leaders of The Guardians, who you will join after your first couple missions. In fact, there are fairly big stars even in really minor roles in the game. Claudia Black from Farscape and other sci-fi shows voices Tess Everis, a merchant in The Tower who provides special items. Claudia is great in everything she does, and it’s strange to find her just manning a shop, but still a nice little treat.

Overall: If you enjoy a good sci-fi game that makes you feel amazing as you play, Destiny is the game for you.

Cons: The story can be a bit disjointed, but not terribly so. It may cause you to break your controller’s triggers from extended rapid use. But at least you will be sacrificing them to a good cause.