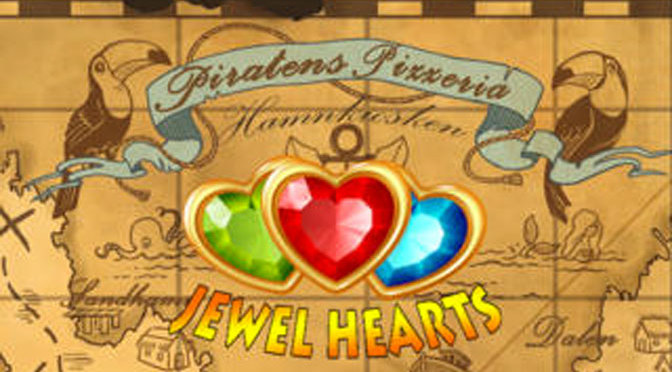 Jewel Hearts is a puzzle game whose analog could be found among any of the other countless matching puzzlers available for iOS. What it lacks in originality of concept, it makes up for in size of playable space.

Offering three types of gameplay, the user can test his or her jewel matching prowess in timed “BLITZ,” practice forming 2-D Rubik’s Cube-like shapes in the “PUZZLE” arena, or work through a map of four separate journeys, with 80 individual levels, in “CLASSIC” mode. Within “CLASSIC” there is a section after the fourth journey map proclaiming that new journeys will be uploaded. I’ve had the app for a while now and haven’t received any journey updates from the developer, but who knows? These things take time.

“CLASSIC” is where I focused most of my attention. There is a wide array of obstacles and constrictions that become progressively more limiting as you work through each journey, some of which limit how easily you can pair the jewels, locking them into place or blocking them entirely.  I never got tired of trying to match my way through Jewel Hearts and I could definitely enjoy this game if I were in a waiting room or stuck at the mechanic’s or whenever I’m zipping along on that beautiful luxury: public transportation.

There are some drawbacks in Jewel Hearts that I have not experienced with some of the other matching puzzle games. First off, it takes a few minutes for the game to load. This isn’t a lot of time in the grand scheme of things but there were a few occasions that the game didn’t load in time for me to play while I was waiting for my prescription, pizza, etc. Also, there is a limit to the number of times you can actually play the game due to the in game economy based around lightning-bolt tokens that are generated after a given number of minutes. Frustrating if you want to keep playing the game when you happen to be on a flipping sweet hot streak, but I digress.

I found the poorly composed GarageBand wordless sea shanty style music very annoying but as time progressed I found it slightly less so. However, I mostly played the game without any sound. So the music is really nothing to write home about, but the game does offer up dual language options: English, and a Cyrillic based language that I am assuming is Russian. For anyone looking to polish up on your Russian language skills and weave your way through a jewel matching puzzle map at the same time, this is the game for you.

Check out Jewel Hearts and feel free to leave some comments in the box below.