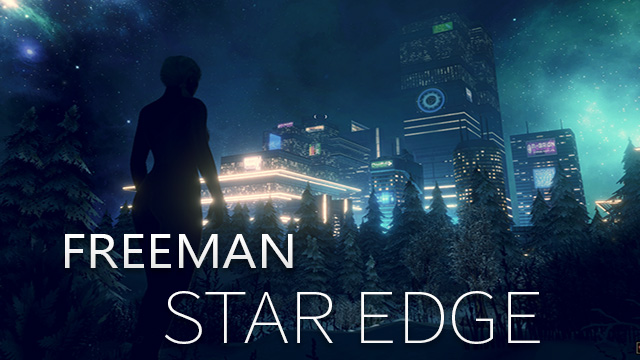 Freeman: Star Edge was successfully greenlit on steam back in January 2017. The game is a complete sandbox experience giving players the freedom to explore and travel the universe without the limitations. Exiled to the Star Edge, raiders, warlords, and merchants vie for wealth and power in distant galaxies. Every choice is your own, choose to gather and trade, explore strange lands, or command starship armadas. The destiny of entire worlds await.

“We want to combine space exploration with ground expeditions. And merge realistic Arma style combat with intense large-scale space combat into one-fluent single player game,” says, Lead developer, Hai Ren, during an interview with CobraTV
Many people are describing the Freeman: Star Edge game as “It is like a mashup of Mount & Blade, Skyrim and Mass Effect.”

The studio just launched their thunderclap to support their upcoming Kickstarter campaign due to launch on Oct 3rd 2017.

Tactical Squad-based Ground Combat: Wade into glorious battle with your allies and mercenaries. You manage equipment, logistics, morale, and training to maximize combat efficiency. Lay siege or skirmish in the open field to win combat objectives. You will also decide on tactics: take it slow and steady with camouflage and suppressed weapons or go full throttle with automatic weapons, sniper rifles, and explosives.

Grand-scale Space Combat: You can lead a fleet of various ship classes and engage in epic combat in space. Achieve victory by boarding enemy capital ships, or winning dogfights and battlecruiser clashes. You can upgrade your armada with the spoils of war, choosing from laser weapons, missiles, and torpedoes. Whether you hunt space pirates and loot their bases or wage a campaign against a powerful imperial navy, your victories will change the balance of power.

Dynamic, free-form gameplay: Define your own success and set your own objectives in a living world. You are free to loot, gather, mine, and trade, gamble and grab a drink at the bar. Find your place in society by seeking out friends, contacts and companions and building relationships, or go it alone, infiltrating strongholds and using diversions and assassination to get what you want. Each day in Star Edge is unique and gives you a chance to step in and decide the politics of the system. Factions engage one another dynamically. Each world is full of conflicts and intrigue: bandits raid friendly settlements, resource wars will break out, and cautious alliances will be formed as your story evolves.

Modding Support: We will work closely with modders to create a modding friendly system and allows a lot of user-generated content.

In general, gameplay is broken down into two parts: Exploration and combat. The game blends these two parts smoothly and lets the player choose how to play the game. When starting a new game, the player will be asked a few questions to determine the character’s initial attributes, equipment and the initial state of the dynamic game-world. Then the customization window will allow the player to tweak the facial features of the character. Galactic traveling is handled by point and click on the “Galactic View”, an over-world map which displays all locations and fleets. When encountering a fleet or location, the player can choose between engaging it or approaching it peacefully. The player can land on most planets and space stations for the ground expedition or fly around to explore the local space.There are many places to be discovered, such as caves, ruins, bandit camps and others. Most of them are dungeon-like locations filled with dangerous enemies, traps, and handsome rewards.

There are many things you can do during exploration, mining, visiting different places, trading or you can commit crimes like stealing or raiding. Experiences can be gained through combat and other activities such as completing a mission. The player has multiple slots for customizing equipment loadout. Upon leveling up, the player can improve the character’s ability by assigning skill points. The player can take control of any habitable planets or space stations by eliminating all enemy fleets and ground forces guarding the planet/station. Multiple options such as building military or economic structures and training security forces will be provided to increase income and security of the owned planets. Eventually, the player can build up an incredible fleet and ground army to conquer the universe.