I’m not going to lie, when I heard that Finn Jones and Jessica Henwick from the Marvel Netflix series’ Iron Fist and The Defenders were headlining Baltimore Comic Con, I was nervous. Finn Jones plays the title character, while Jessica Henwick is the romantic lead opposite him, Colleen Wing. I am a fan of the Marvel TV universe and have been following the Netflix, TV shows along with the recent movies. Even though I enjoyed it probably more than most, I found the first season of Iron Fist to be disappointing. As many critics will point out, the fight scenes were lackluster and the plot was slow to start. Even the main character is hard to relate to, especially in our current political climate. So, I was worried going into this panel that the audience questions would be pointed and that the panel would end up being very uncomfortable. 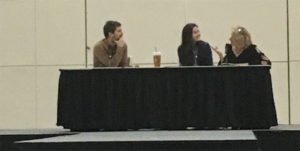 It was awkward but not for the reason I thought it would be. The questions from the panel were relatively bland. When did you realize you wanted to go into acting, both Finn and Jessica had figured it out early in their lives. Finn could not recommend meditation enough, stating that his work on Iron Fist has allowed him to include more meditation into his daily routine. His favorite martial arts form is Taichi while Jessica enjoys Akido the most. Both actors had roles on Game of Thrones and they each talked a little about their experience on set. Finn shared his personal Game of Thrones theory, that the iron throne contains dragon glass and will need to be dismantled to use it against the White Walkers. Finn enjoys the color orange, while Jessica loves blue and yellow.

I think I could have enjoyed learning about the actors if it didn’t feel like some sort of competition between the two of them, with Jessica Henwick being particularly aggressive answering Finn’s questions and talking over him. At one point an audience member asked Finn how the special effects for his Iron Fist work. He started to answer the question explaining that he wears a sort of bracelet with wires and then he can’t get anymore words about because Jessica is loudly saying that it works by magic. She kept repeating nonsense about how it worked by “magic,” until Finn gave up trying to answer the question and left it at a, “What Jessica said.”

I felt sort of bad for Finn because he was clearly “losing.” When another fan asked what other TV show they would like to be on, Finn responded with Westworld, and the added Adventure Time. Not to be topped, Jessica said a Handmaid’s Tale, but then added Rick and Morty because “it’s way better than Adventure Time,” and finished with Firefly for good measure. The dynamic between the two actors was uncomfortable to watch. I found Jessica’s personality to be off-putting and was surprised that of the two of them she was less relatable.

Also, an interesting fact, Finn confirmed that Iron Fist will be able to use his power through both fists eventually on the show. When I heard this I immediately thought, so what about his feet then?