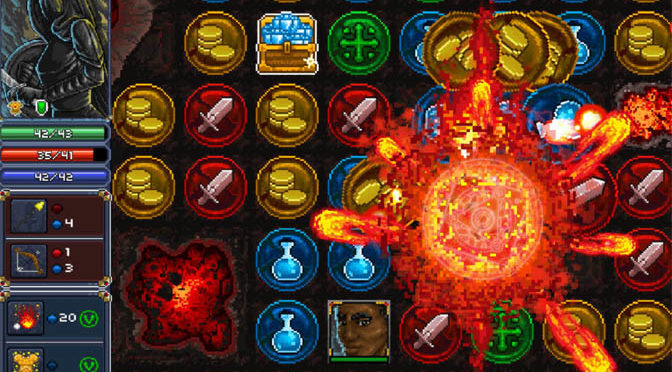 My time wasting this week landed right in my lap. Well, not literally. It’s been years since I’ve had a company send me a physical copy of a game. Instead, I was given a Steam code for Darkest Hunters by the developers.

Darkest Hunters is a mix between a match three game and an RPG. The goal of the game is to progress through levels while defeating monsters and collecting loot. To do this, the player drags their character across the different icons on the map. There are icons for health, money, mana and attack. Picking up health heals, money is obvious, while mana and attack are a little different. A player can only pick up one type per turn and they can make as long of a chain as possible.

Combat in Darkest Hunters isn’t as simple as just clicking on an enemy. I mean, sure, that’s what you do, but each action requires points. This means that using attack or magic drains those respective points. The amount of points that drain depend on the weapon in use. If the player doesn’t have enough points to use their weapons, then they attack with their bare hands for pitiful damage.

Defeating enemies and picking up icons grants players experience. Once they get enough experience, they level up. Rather than a true stats system, Darkest Hunters goes the Skyrim route for leveling. Players can choose to increase their mana, health or attack points. These levels don’t actually make the player any stronger and are a bit too shallow for me.

With levels not doing much, the main way to get stronger in Darkest Hunters is through better equipment. The game throws plenty of this at the player, but it isn’t just equipping it that matters. When players collect enough of the same piece of equipment, they can combine them together to upgrade that armor or weapon. This gives it better stats, but upgrades are incredibly expensive. This is where I start to have a complaint with the game.

Darkest Hunters got its start as a mobile game, but this new version is a little different. The PC version of the game throws out the mobile model. This means that players will actually pay for the game and then won’t have to deal with ads, microtransactions or energy limits. I’m all in favor of this idea and hope more mobile developers consider it. However, that doesn’t mean that this was a perfect transition.

My biggest problem with Darkest Hunters is that you can still feel some of its mobile aspects. Most specifically is the lack of gold players get in the game. This makes sense for the mobile version. Developers have to get money somewhere and microtransactions and ads are the best way to go about it. In return, the player gets gold to further their adventures. The problem with the PC version is that this option isn’t available. This means players will just be sitting on upgrades that they can’t afford all too often.

I’m not saying add microtransactions to the PC version of Darkest Hunters. Please no. What I am saying is increase the amount of gold players earn. Otherwise it just becomes a grind fest through already-beaten levels for more gold. It kills the fun I’m having and ruins the pace of the game, and this is coming from a guy who loves to grind in RPGs.

Unfortunately, the gold issue in Darkest Hunters is enough to bring the game to a complete halt. There’s nothing like reaching the boss of an area only to have your teeth kicked in by it. Leave and grind for levels and gold. Upgrade items and return. Then have your teeth kicked in again. I could understand more if it had to do with strategy, but this just isn’t the case. Also, gold has other uses than just upgrades, which only puts more strain on the player’s in-game pocket.

We can get back to the positives of Darkest Hunters by talking about its visuals and sounds. The graphics in the game are great. It’s all done with pixel art that gives it a retro feel. The game uses a more western style than most games go for, which is refreshing. Audio in the game also follows this trend. There’s somber music playing throughout that adds to the dark atmosphere that the game is going for.

Overall, Darkest Hunters has a lot of potential, but it needs a couple of tweaks before I can really recommend it. The gold issue is just too much to ignore and hampers the game so badly it hurts. Let me be clear here in closing. This has everything it needs to be an entertaining game, but the leftovers of its mobile heritage ruin it. Here’s hoping for an update in the near future!