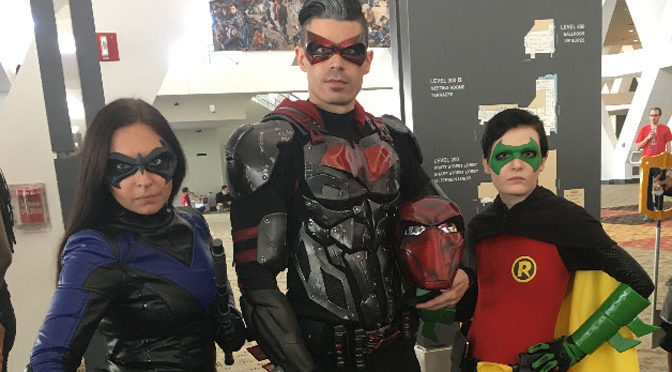 When I walked in before the panel was slated to begin, the room was decidedly neutral for a group of people waiting to see two headliners from the dark drama of Gotham. Fluorescent lights hummed on a large, mostly empty room; the audience energy mimicked that of passengers waiting on a long layover. Despite the steady decline of ratings throughout the show’s lifetime, I still expected a degree of anticipation that seemed lacking from the room. As a few more observers trickled in, David Mazouz (Bruce Wayne) and Sean Pertwee (Alfred Pennyworth) were suddenly present. Excitement streaked back through the audience as the microphones adjusted and everyone woke up: Batman and Alfred were here.

But it would be a while before the panel really got into Gotham, the imminent transition of Bruce Wayne into Batman, and the actors’ experience in making the show. The moderator, who had a kind of nervous energy that made the interview somewhat uncomfortable to watch, chose instead to kick off the panel with a foray into the past. Although her questions for Pertwee about his previous work could have developed a deeper connection between the fans and the actor, the timing of these questions was a bit forced. Successful celebrity panels begin much like a first date: discussion of what we have in common. In this case, that should have been Gotham. For all but the most die-hard fans, these introductory questions provide a common ground to relate to these people who we may have never experienced as themselves. The beginning of the interview gives us a sense of who they are, and builds the foundation for caring about their life before Gotham. Although this transition was sorely lacking, it remained impossible to not connect to Pertwee and Mazouz. With a humble but confident demeanor, Pertwee answered the moderator’s questions with a quiet honesty that made him immediately relatable. He described his early relationship with acting as a hesitant one, born out of awe for generations of performers that came before him. When asked if he would ever play the Doctor from Doctor Who, he offered an honest glimpse into his relationship with his father, plainly stating: “In my opinion, my dad was the Doctor. And he was the best.”

In parallel, Mazouz had his own distinctive charm. He answered questions with an easy confidence that is not often found at 16 years of age, attributing this energy to his growth throughout Gotham. His responses still exhibited his youth, however, dipping between feeling rehearsed and clumsy. He seemed to struggle at times to find his footing, and missed a beat with the audience when he revealed a lack of exposure to Batman prior to the show. The moderator frequently placed an emphasis on Mazouz, allowing long-winded answers to monopolize the panel. It was easy to forgive any of these missteps, however, as the conversation turned to Gotham specifics. Mazouz was quick to laud the work of his fellow cast, specifically praising the work of Cameron Monaghan (Jerome Valeska, the Joker) as a method actor. When asked about the most impactful scenes to perform his first thoughts were of heavy, emotional moments with Pertwee. In fact, the bond between these two was tangible. They both spoke highly of the other, Pertwee recounting the joy of watching Mazouz grow into his talent and Mazouz attributing this development to learning from Pertwee. This strong connection between the two established a familial vibe that was a joy to experience.

Luckily, the moderator seemed to sense the desires of the room about halfway through the panel, and quickly segued into audience questions. Now-energized fans quickly lined up, stretching to the back of the room. The questions ranged from personal to specifically Gotham, and incited genuine, playful answers from both Pertwee and Mazouz that played off one another. Even when a technical difficulty jarred the stream of questions, both actors were able to quickly immerse themselves back into the moment. The only unexpected twist occurred when a fan resolutely stepped to the mic, bluntly questioning Mazouz on his political views. The pause that ensued was tense and awkward, and for a moment not even the moderator was ready to smooth over the situation. This lasted for only a beat, however, before Pertwee intervened. With an even tone, he firmly dismissed the question as inappropriate for the forum. It was pointed out that Mazouz is not even old enough to vote. And with a paternal, protective air befitting of Alfred, Pertwee turned to the next audience member and asked, “Next question?”

While the panel had a few moments of awkwardness, it overall provided a beautiful insight into the dynamic and personalities of these two actors. Despite being about Gotham, the show itself took a backseat to the experiences and relationship between Pertwee and Mazouz. In fact, it almost felt as if Bruce and Alfred were really there with us.