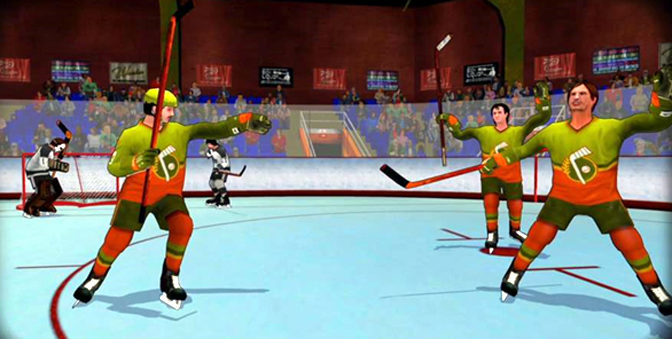 Old Time Hockey is here! Lace up your skates and hit the ice with V7 Entertainment Inc.’s donnybrook-filled take on the good ol’ hockey game. PlayStation 4 and Steam players can jump into today with Xbox One planned for later in April!

Old Time Hockey channels classic arcade style action (NHL 94, Blades of Steel, and Tecmo Bowl to name a few) with an old-school aesthetic from the 70’s era. Play dirty, incite bench clearing brawls, and marvel in way too many mustaches to count– all of this and more can be found in the Bush Hockey League.

Team up or take out your friends on the couch in arcade mode, or take to the ice as the worst team in the Bush Hockey League in Old Time Hockey’s story mode!

Control schemes range from classic arcade 2-button controls, beer mode (one-handed) to a more modern take. If the latter is more your style, use the secret “Konami code” on title screen to unlock it immediately!

Enter the classic Konami code using the d-pad: Up, Up, Down, Down, Left, Right, Left, Right, Circle, Cross (Or B, A on Steam). You’ll hear “Kill, kill, kill!” if it works. You’ll now find that Advanced controls will be unlocked in the Settings menu.

For more information, head to www.arcadehockey.com.