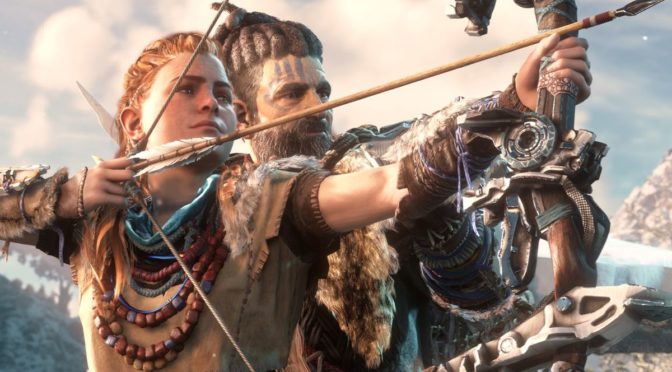 Horizon Zero Dawn delivers its promise of robot dinosaurs in a gorgeous openworld adventure. Unfortunately, it also delivers a masterclass in cultural appropriation, with no respect for the real world cultures it borrows from to lend its fantasy world a hint of ‘exotic tribalism’. It’s a shame, because beneath the problematic surface there is an engaging game with lots to enjoy.

Be under no illusion, Horizon Zero Dawn is beautiful. From the snowy landscapes of the Nora’s homelands, which quickly become golden grasslands, through to the hot, dusty canyons around the bustling city of Meridian. The ubiquitous photo mode is present and correct, allowing you to capture that sparkling sunrise, a splash of moonlight on a pool or the towers of a distant city.

Our heroine is Aloy, the outcast of her community, who is brought up by fellow outcast, Rost. As players, we are introduced to Aloy as a girl dealing with prejudice from the other villagers, who pull their children away when she’s near.  During this childhood sequence, Aloy finds a piece of tech called a Focus in a cave, which she wears on her temple, giving her the ability to scan the area for clues and people, as well as machines.

The story kicks in quickly and I cared about her relationship with Rost and her search for her mother and the reason why she was outcast as a baby. This question, combined with Aloy’s character was enough to hook me in and I found the game hard to step away from.

[amazon text=Grab a copy of one of the most beautiful games ever created for the PlayStation 4 from Amazon.&asin=B00ZQC73O8]

Of course, the stars of this beyond gorgeous landscape are the robot creatures, which stalk the forests and the deserts and even soar through the air. Horizon Zero Dawn borrows gameplay elements from other games, such as Assassin’s Creed and The Witcher, but the combat sets it apart from those.

Aloy has a wide range of options at her fingertips.  She is a girl with a bow, in the now well-worn tradition of Katniss Everdeen and more recently Lara Croft, but she does more than  snag a rabbit or two for dinner. Different bows can be equipped with fire, freeze or shock arrows, which disable the robots for a short while. Once felled, the machines are a source of resources, used to sell or make weapons and other upgrades.

She also has traps and bombs to deploy, if you get in a tight spot. With a bit of stealth, you can set electric fence-style ropes across a creature’s path to shock them, allowing you to get the upper hand in a battle. You can also use rope to tie them down, but don’t try this mid-fight, as the controls are slow and fiddly. If in doubt roll and shoot using your Concentration a.k.a. bullet time or just hit it. That works too.

The combat isn’t a walk in the park, as the creatures get bigger and more aggressive, with even the grazers attacking if startled. For instance, the snapmaws are giant robot crocodiles that spit freezing powder; taking a serious toll on your health bar. After one battle, a group of scavenger robots came in and attacked me before making off with my kill. In another, I was clearing a corrupted area, but had too much aggro so backed off. The creatures followed me and bumped into another group of robots, who finished them off, as I crouched in the grass.

As the game progresses, Aloy learns how to override some of the lower level beasts. In order to override the other beasts, you need to complete the Cauldron side quests, which are dotted around the map. The game doesn’t make this clear at all, but if you don’t do these quests you’re making things difficult for yourself.

The Cauldrons are mini dungeons with fairly easy puzzles and a boss battle at the end. Your reward is loot, XP and the all important ability to override the bigger beasts. This means that over time you can tame mounts or even the big aggressive machines and have them fight for you.  There are a wide range of beasts to fight, each with their own weak points, revealed by your Focus, so stock up on weapons with different elemental attacks to make sure you can take them down.

Aloy is an outcast in her world, which is the narrative device used to allow her to move freely, unhindered by her Nora culture’s mistrust of technology and restrictive laws. However, it’s Aloy’s culture, which is the most problematic aspect of Horizon, as it borrows heavily from Native American and other indigenous cultures.

The Nora are seen as a ‘primitive’ culture in this post-apocalyptic, far future world. The only technology in the world is the robots roaming the land and ancient artifacts, which people don’t understand. From their clothes to the description of their soldiers as ‘braves’, it’s clear that Native American cues have been taken and blended with Norse or Celtic visual elements to create a cultural Frankenstein’s monster.

Some of Aloy’s outfits feature offensive feather headresses, the obligatory splash of turquoise with earth toned animal skins. In addition, there are so many white people sporting dreadlocks that it looks like an after party at Glastonbury Festival. And what’s most problematic is that there are no indigenous people in the game, whilst the NPC characters refer to the Nora as ‘savages’ on a regular basis.

Ironically, Horizon does populate the world with lots of different skin colours.  However, the black people are stuck with the one hair texture, so sometimes have straight hair, unless they have dreadlocks. The developer Guerilla seems to have made some effort to create a diverse cast, they just overlooked the fact that they’ve borrowed heavily from existing cultures and then used white leads to represent the return to a ‘tribal’ nature-honouring existence.

When it comes to the other cultures, Horizon’s team has a great time with creating interesting aesthetics that don’t violate anyone’s real life culture. So this oversight is a real shame.

Apart from felling robots, Aloy talks to a lot of people, travelling across the vast world with its varied landscapes. The dialogue is okay, but it’s not great. Sometimes Aloy’s modern day quips sound anachronistic, but generally she’s a likeable, honourable character who it’s easy to get behind.

As a female lead, Aloy actually tackles the patriarchy head on, which is unusual for a video game. The Nora are a matriarchal society, so when she meets a priest from a patriarchal community, she questions this, for an interesting exchange. It’s a small exchange, but notable, especially as NPCs in that culture continue to marvel at women in positions of power, as you walk by.

People across the world ask Aloy to help them out, presenting a wealth of side quests and errands to increase experience. There is a dialogue wheel during conversations, but rather than creating meaningful choices for the player, it’s just a way of finding out about the world. There is no sense of a BioWare style branching narrative, where your relationships with certain characters matter.

The main story does lead you through the game, but as with any openworld game, there are a wealth of things to distract you. If you choose to, you can spend hours on end exploring every crevice, with artefacts to find and sell to traders, bandit camps to clear and quests for NPCs to complete. There are also view points, which reveal aspects of the world before the cataclysmic event.

This has to be one of the best looking games of this generation so far. The landscapes vary from lush forests to snowy mountain tops, which slowly turn into Grand Canyon style deserts. The city of Meridian is beautiful and proves that the team at Guerilla does know how to create a fictional culture without appropriating, which makes the insensitivity of the Nora even more disappointing.

Although there is a fast track option and it is handy, you need to spend a lot of time travelling on foot in order to collect resources. I’ve been caught out once or twice without enough ‘blaze’ resource to make my fire arrows, which will be your go to weapon. You also need to make sure your pouches are big enough to store resources, which means gathering more resources and well, you get the picture. This can be an exercise in frustration, but it’s not enough to strip the fun out of Horizon Zero Dawn’s great story and combat.

It’s surprising that for a game this beautiful, sometimes Aloy looks like she’s overdone the Botox. Some of the NPCs have really emotive faces, but Aloy is strangely expressionless. Other than that, the graphics are flawless, as is the detailed world design.

Horizon Zero Dawn may have gameplay elements from other games, but there’s enough here to set it apart. It’s probably the best looking PS4 game yet, with lots to explore and engaging characters to meet. Aloy isn’t the most memorable character out there, but the world and the story do draw you in. Added to that, the variety of robot creatures and combat styles you can employ makes the whole thing a massive amount of fun. This makes the cultural appropriation even more disappointing and it hangs over an otherwise excellent game.