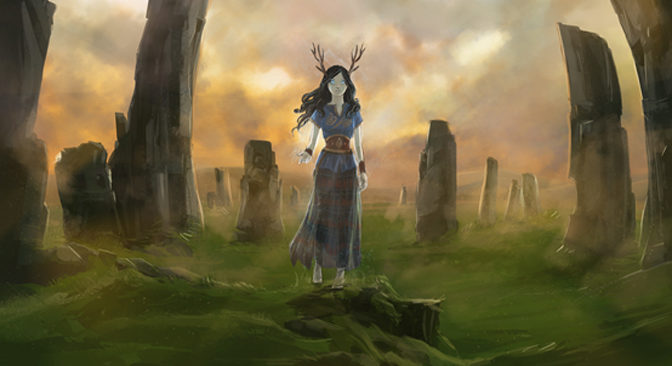 After the critical success of Along the Edge in 2016, Nova-box is proud to present Seers Isle, a new and improved version of their take on the interactive novel. Seers Isle is set in a fantasy version of medieval northern Europe, beautifully crafted with hundreds of handmade paintings.

In Seers Isle, your choices impact the fate of a group of characters and each playthrough is the length of a small novel. It features several story paths and endings, depending of your favorites characters for an high replayability.

A group of shaman apprentices set foot on the shores of a sacred island to be initiated to magic. As they progress through the wilderness, looking for the “Seers”, their spirit-guides, they realize they’re not alone.

Who is this strange horned woman they are seeing in their dreams?

Seers Isle is an interactive graphic novel for PC, Mac and Linux. It will be released during the summer of 2018. It’s a narrative game, set in a fantasy version of medieval northern Europe, where your choices impact the fate of a group of characters.