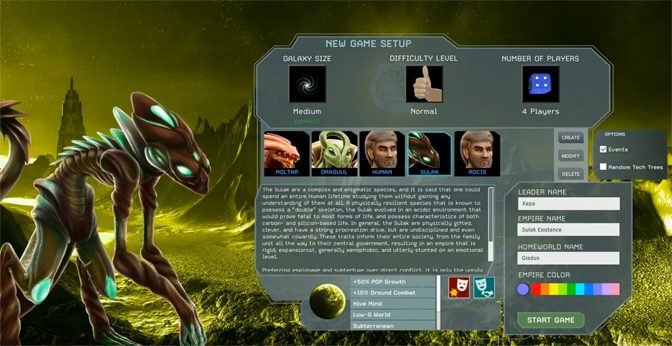 Interstellar Space: Genesis, a spiritual successor to Master of Orion II: Battle at Antares and other classic 4X titles from the ‘90s, has hit the fabled Alpha milestone.

Developed by Portuguese studio Praxis Games, Interstellar Space: Genesis is a turn-based space 4X strategy game where you play as the Emperor of a space-faring civilization. You’re free to explore the wonders of space – colonizing other worlds and expanding their sphere of influence across the stars … where untold mysteries and danger await. Venturing into outer space, it soon becomes clear that you are not alone in the universe. In fact, meeting other species is a virtual certainty: What will you say (or do) when you end up facing off against another sentient species? Will there be peace, cooperation, and progress – or will there be blood?

The brainchild of Adam Solo and Hugo Rosado – the team behind sci-fi strategy website SpaceSector.com – Interstellar Space: Genesis will deliver beloved Master of Orion II-inspired gameplay mechanics while providing the “quality of life” features players have come to expect from modern titles.

“My initial vision for Interstellar Space: Genesis was prompted by some basic questions: What types of beings will the first explorers meet once they leave Earth’s gravity well behind? And what will happen when humankind makes actual first contact? That was the beginning, the initial spark. I didn’t know for sure how much I’d want to innovate, but I knew in my heart that the game would be a space 4X game and that the gameplay could not be very different from the two games I loved to play the most growing up – namely Master of Orion and its incredible sequel,” said Adam Solo (Co-Founder, Praxis Games).