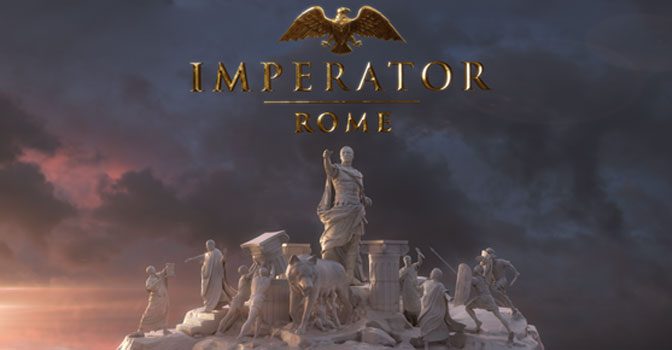 Alexander is dead, and his generals now fight over his legacy and empire. To the east, Chandragupta has established dominion over much of India. To the west, the commercial republic of Carthage and martial republic of Rome are on a collision course for control of their half of the Mediterranean. And, far from the cities of coastal empires, fierce tribes of what the Greeks call “barbarians” follow their own paths.

Get ready to dive into the epic conquests and geopolitical drama of the classical world in Imperator: Rome, a new grand strategy game from Paradox Development Studio available now for $39.99 at major online retailers.

Choose from hundreds of republics, monarchies and tribal regimes and guide your nation to eternal glory. Will you repeat history and lead Rome to empire and glory? Or will you defy the fates and unite the Hellenistic Kingdoms under one crown? Can Carthage resist destruction, or will old Cato’s demand for its total destruction be fulfilled again?

The features of Imperator: Rome include:
• Challenging but familiar classical setting: Rome does not yet dominate Italy. Carthage manages dozens of vassal city states in a naval empire. The mantle of Alexander is disputed by kings in Macedonia, Egypt, Anatolia and Persia. India bows to Chandragupta’s Mauryan might.
• Unique Government Mechanics: Kings will find they have a freer hand to do as they please than a consul in a republic, but with fewer political outlets, monarchies may breed traitors more quickly.
• Most detailed Paradox map yet: Hundreds of towns dot the map, some with fortresses or ports to emphasize their strategic importance. Each province’s population will ultimately determine its value and purpose in the empire.
• Population management: Citizens, freemen, slaves and tribal populations bring benefits to your empire, but also burdens if the influx of cheap foreign labor strains your research or food supply.
• Flexible trade system: Exchange surplus goods from far across the sea to satisfy your people or build better armies, or keep your surplus for added bonuses at home.
• Cultural Military Traditions: Different cultures will evolve their armies in different ways. Embrace the Parthian horse archer as a Persian nation, strengthen your triremes as a Punic power or trust everything to the heavy infantry as a Roman.
• Battle tactics: Choose how your general will approach the coming battle, making the most of force composition and terrain. Use your light infantry to skirmish advantage in rough ground. Gamble on a full assault in open plains.
• Manage a court of hundreds of characters: Watch and guide hundreds of characters through three centuries of history. Families will rise and fall in prominence. Some will be heroes, some will be traitors. Create new legends that will sing through time.
• And Much More: Dynamic events, scheming against rivals, beautiful art and music, barbarian migrations, inventions, religious ideas, laws, royal pretenders and other features to fill in a rich ancient mosaic.

Be a Hannibal. Be a Ptolemy. Be a Caesar. The riches and majesty of the ancient Mediterranean are yours for the taking. Seize the day!