Frostpunk, a grim city-survival game about leading the last city on Earth, is landing today in all major digital stores: Steam, Humble Store, GOG.com, and others. 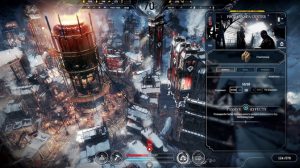 “From This War of Mine to Frostpunk, we’ve evolved our game’s content to robustly explore player’s morality deeper and more in-depth than ever before. We’ve been searching this fascinating gray-area, where nothing is purely good or evil. You, as a player, need to make decisions based on your moral compass and ability to foresee the consequences of your choices. From deciding the fate of individuals to deciding the destiny of an entire society – that was the creative process of Frostpunk. That’s how I’ve watched this game develop into a story about the price of power; about the responsibility of being a leader. That was a challenging project, but I’m delighted to see its premiere today and I’d like to express my big thanks and respect for the team at 11 bit studios for making this game as it is,” says Grzegorz Miechowski, CEO at 11 bit studios. “I hope it’s just the beginning of a long journey. We already have a ton of ideas and plans to add new scenarios to the game and vastly expand the universe,” he adds.

Frostpunk is the first society survival game. As the ruler of the last city on Earth, it is your duty to manage both its citizens and the infrastructure. What decisions will you make to ensure society’s survival? What will you do when pushed to breaking point? Who will you become in the process?