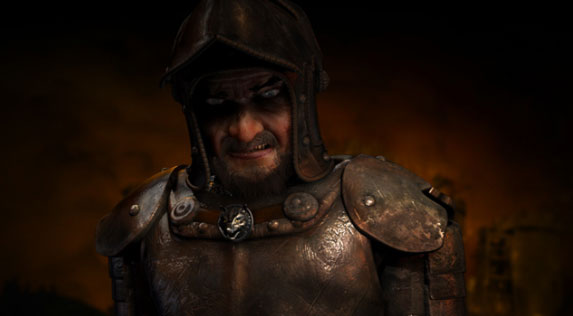 Stronghold Crusader 2 has gone gold and to celebrate Firefly Studios has released new gameplay footage of the series’ most notorious AI opponent:

“Stronghold is known for its tendency to test players’ mental dexterity, and with the resurgence of these kinds of games it makes perfect sense to include The Wolf,” the developer said in a new blog post. “We want this addition to the cast of AI characters to reinforce our message that Crusader 2 retains the series’ sense of challenge. When you are victorious against The Wolf, or any character for that matter, it should feel like an absolute triumph.”

An opponent who taunts the player with lines such as “I would rather tear down your castle with a spoon than offer you assistance,” The Wolf does not mince words. As an AI Lord he is not the greatest ally, his aggressive attitude and unpredictable mood making military assistance or trade unlikely. As an AI opponent however The Wolf provides skilled Stronghold players with the worthy challenge they seek.

Skirmish matches against The Wolf are characterized by his ability to build strong defenses early on, turtling until he can amass an army of the game’s most heavily armored units. Rushing The Wolf is difficult, but the longer players leave him alone the more dangerous he becomes! In order to stand a chance, players must match his numbers and employ effective counter-troops. Crossbowmen are required to pierce his troops’ thick armor and Pitch Ditch is needed to set his Swordsmen ablaze. Units who are weak against armored troops, such as the Whirling Dervish, should be avoided.

Stronghold Crusader 2 can be pre-ordered on Steam with 10 percent off, exclusive mini-campaigns and more.