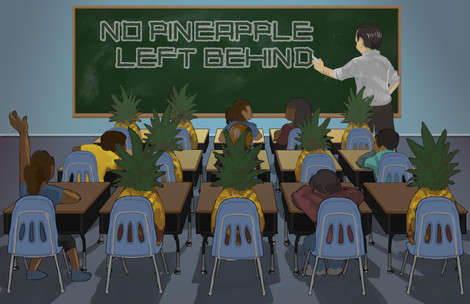 Seth Alter, from Subaltern Games, has a released a trailer for upcoming indie No Pineapple Left Behind, a single-player PC game around education reform. (Seth’s the developer of serious strategy game Neocolonialism and was also kind enough to do an interview for my students about indie development!)

In No Pineapple Left Behind, players take on the role of school administrator at a school where a wizard has turned all the students into pineapples. Don’t worry, thought, it turns out that pineapples are preferable to students because pineapples take tests and get grades (they are enchanted pineapples, obvs) without asking annoying questions, getting bored and restless, or all those other pesky things that children do. The school’s goal is to pass exams, and no one really looks too hard into whether a child or a pineapple took the exam, as long as they get a good grade. So when pineapples do well on their exams, the school and therefore the player, will get more money.

Unfortunately, the pineapple cure is not foolproof, and sometimes an unattended pineapple can turn back into a child. Ugh. This is an undesirable outcome, because children need things besides exams and children do things besides take tests.

Just like Neocolonialism, McVideogame, Cow Crushers, and many other successful message games, No Pineapple Left Behind will ask players to take on a surprising role, asking them to become the school principal and keep the pineapples taking their exams. The game’s success is measured in the school’s funding, naturally.

Some of the player’s goals in No Pineapple Left Behind will include leveling up teachers and then firing them when they burn out, or identifying and expelling problem children before they affect the pineapples’ exam averages. You’ll also be able to cut those frivolous art classes to save money.

The game will have scenarios to play through, as well as a sandbox mode for free play. Of course, we recommend against anything as open-ended and free as sandbox play, and suggest you study for your exams instead.

Check out the trailer here: