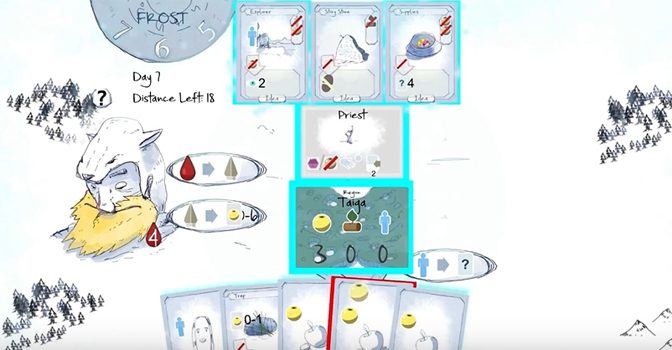 There’s a storm brewing! Indie publisher Digerati is delighted to announce that Frost, a unique deck-building survival adventure, will be blowing its way to PS4, Xbox One and Nintendo Switch in just a couple of weeks! Frost will launch for PS4 on 17/18 July (NA/EU respectively), 19 July for Nintendo Switch, and 20 July for Xbox One.

Designed and developed by Jérôme Bodin, Frost takes place on an arctic, apocalyptic world where the last remnants of humanity are engaged in a relentless struggle for survival.

Since launching on PC and mobile, Frost has been praised for its stark, hand-drawn visuals, atmospheric soundtrack, and tense card-based gameplay.

Frost is a deck-building, solo survival card game set on a harsh, frozen world ravaged by a lethal storm. You must lead a group of nomads in search of the Refuge – a haven away from the Frost’s icy grip.

As well as the unrelenting threat of the Frost, your arduous trek will be fraught with many other dangers, such as wolves, cannibals, hunger, and fatigue. Manage your cards wisely to stay alive and make it all the way to the Refuge.