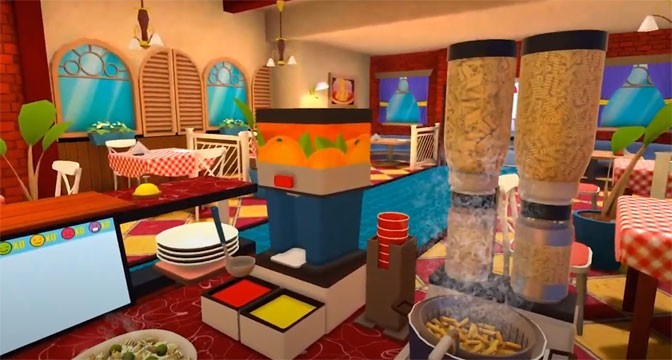 Developer Flat Hill Games has announced that delicious virtual reality cooking game Clash of Chefs VR will exit Early Access and launch for the original Oculus Quest and Oculus Quest 2 headsets this summer alongside other Steam VR-compatible devices including Oculus Rift, Valve Index, HTC Vive, and Windows Mixed Reality. Clash of Chefs VR allows foodies to play with their meals like never before, challenging them to prepare American, Italian, and Japanese recipes as quickly as possible to defeat online or asynchronous multiplayer opponents and climb the leaderboard. In addition, fans can ripen their skills across 80 different single-player levels.

The final, complete version of the game will include content currently unavailable in the Early Access version, such as a new themed restaurant, achievements, customization features, and more.

“Oculus Quest’s catalog is hyper-curated to ensure a high degree of player satisfaction and great return on investment for developers,” says Adrian Djura, CEO and Founder of Flat Hill Games. “We’re proud that our virtual food frenzy, Clash of Chefs VR, will soon be featured among other quality titles on the headset’s platform.”

As players begin mastering the culinary arts, customers will demand increasingly complex dishes. Fans must carefully measure bacon on burgers, beans in burritos, shredded cheese in pasta bowls, and noodles in ramen if they hope to earn a top spot on the leaderboard and become one of the world’s best virtual chefs. Of course, players are welcome to smash plates over a waiter’s head or toss ingredients in their opponent’s face whenever they want to spice up the food fight.