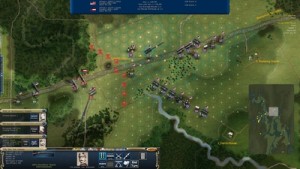 Following up on the success of their last foray into the American Civil War, the development team behind the award-winning “Forge of Freedom” have returned to the period at the tactical level. Brother against Brother: The Drawing of the Sword, the latest new wargame from Western Civilization Software, is finally ready to march. Indeed, this epic military strategy game covering the first year of the American Civil War will be available on April 16th!

It is 1861.  Nearly a million armed Americans face each other along a line stretching 1200 miles from Virginia to Missouri.  Tensions in the country reach a climax when Confederate forces fire upon a key Union fort in South Carolina in April. This is the starting point of a bloody four year conflict between the North and the South that would leave an indelible mark on American history.

In Brother against Brother: The Drawing of the Sword, the focus is on the opening battles of the American Civil War. Players will be able to command both sides and relive the major encounters of 1861 and early 1862. Thanks to extensive historical and topographical research, including in-person examinations of each battlefield and consultations of materials previously unavailable to game-designers, the maps and orders of battle each have been recreated at an unprecedented scale and level of detail.

Connoisseurs of the period will immediately notice that the behavior of the commanders and their soldiers perfectly matches the tactics of this era! However, Brother against Brother is much more than a rigorous simulation, it also offers several what-if scenarios for a very refreshing approach to famous battles such as 1st Manassas or Wilson’s Creek.

“It’s always a pleasure to work with the team at Western Civilization Software, but I believe this release is truly special.  For Civil War computer wargame fans, I believe that the incredible research and great gameplay included in Brother against Brother will make this game the definitive treatment of these battles for years to come,” said Erik Rutins, Director of Product Development at Matrix Games