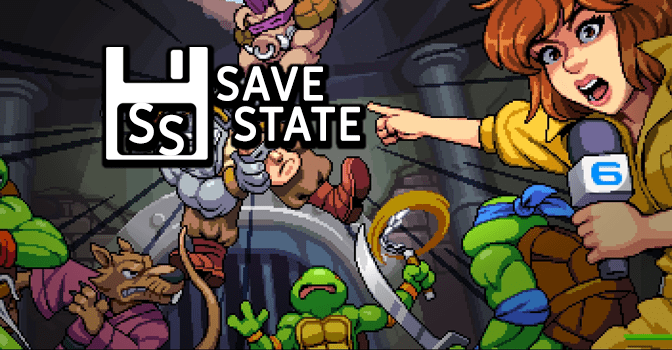 Welcome to Save State, where we love both pizza and turtles. Teenage Mutant Ninja Turtles: Shredder’s Revenge released over the last couple weeks, and while I generally am a fan of RPGs, strategy, and visual novel games, I used to dump a lot of quarters playing things like the TMNT Arcade game, Turtles in Time, or even the Manhattan Project NES game while at home. I wasn’t ever particularly good at them – I think my grandparents considered it an investment to get me Turtles in Time for the SNES because they were fearful of having to take out a second mortgage because I was really bad at the prehistory level. Curse you, Slash. 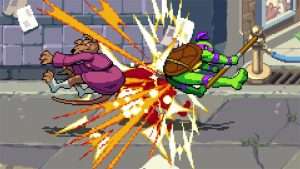 In TMNT: Shredder’s Revenge, players can embark on a beat ‘em up journey controlling up to six different characters, plus one secret character. The four main pizza-loving turtles, Leonardo, Michelangelo, Raphael, and Donatello are playable, of course, but you can also spring into action with Master Splinter and April O’Neil. Each character has some minor variations in stats, with Michelangelo and April being quick with low damage, and Raphael having short range but high powered attacks. All six characters can play at the same time, making for some good, chaotic, multiplayer fun.

As far as combat mechanics go, Shredder’s Revenge gives you access to a basic 4-hit combo string, which you can pause after the third hit to perform other attacks, such as a dash attack, dodge attack, etc.. You can perform a charge attack that guard breaks, and out of a dash you can perform a dash attack or slide which can knock down multiple enemies at once. You have throws you can perform, a rising attack to carry enemies into the air for more punishment, and a dodge attack that can be used after backflipping out of enemy range to whiff punish your foes. On top of all of these, you also have an invincible special attack that can only be used if you fill up your special gauge, which can be invaluable for clearing out swaths of enemies when you’re surrounded. You even get different variations of your special attack depending on if you activate it while standing, jumping, or out of a dash or dodge. 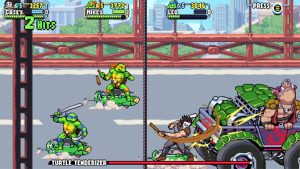 Lots of players of Shredder’s Revenge liken it to Turtles in Time, and while the comparison isn’t completely unwarranted as they’re both TMNT and beat ‘em up games, this is not a remake of Turtles in Time. If you straight out play Shredder’s Revenge like that, you’ll likely not have a great time. Shredder’s Revenge isn’t slow and methodical, where you strategically use things like throws to avoid taking damage. You have a dodge roll that you can attack out of, rising attacks, dash attacks, and characters like April can string together impressive 200+ hit combos with relative ease by bouncing foes off of walls using all of these techniques. Combos in Shredder’s Revenge are incentivized by building your special attack gauge until you get hit, which is a fantastic payoff for learning how to play the game well and not get hit.

Of course, if you’re not great at stringing together combos, you can also taunt to fill your special attack meter. It’s a nice thing players have access to in between fight encounters, but due to the sheer ease with which taunts provide special meter , online multiplayer tends to have a large number of players taunting and spamming special attacks at a rate that would make Hormel jealous. 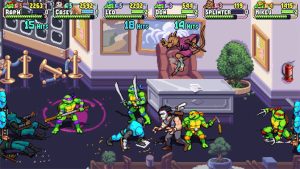 Most of the characters in Shredder’s Revenge play pretty similarly, which is definitely the largest flaw of the game, at least on the surface. Controlling Leonardo won’t feel too terribly different from controlling Donatello, outside of the fact that Donny is a bit slower and his staff has a longer reach. So, for the most part, you can take whichever of the characters you like best out for a spin and have a great time, without too much issue. There are mechanics that are more universal across the cast, such as instantly accessing charged attacks after a dodge to break enemy guards or crowd control better, but once you dig a little deeper into the game’s mechanics there are some fun differences among the characters you can use to your advantage (though not as deep of differences as something like Streets of Rage 4).

It shouldn’t take astute beat ‘em up fans to learn that you can cancel April’s dodge special attack into a rising attack to continue beating on enemies and building back a good portion of your spent special meter. The third hit of Splinter’s combo bounces enemies off the ground directly in front of him, so timing your presses to avoid the combo ender can easily lead to juggling enemies, that sort of thing. Each character has their own methods of extending combos depending on where you are on-screen, so if you really want to build your combo meter high it shouldn’t be too hard to learn the execution to pull these moves off. 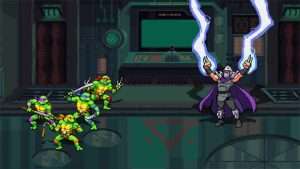 Of course, I don’t want to make it seem like you have to learn each character’s juggle strings in order to enjoy Shredder’s Revenge- there are three difficulty modes, and you’re pretty safe to play however you like on easy or normal. You will want to master the mechanics if you’re going to undertake Arcade mode on the highest difficulty as juggling enemies can score you quick special meter mid-fight when there’s no safe place to taunt. Shredder’s Revenge is substantially easier than a game like Fight n’ Rage or Streets of Rage 4, so it’s a pretty welcoming experience even if you’re not super familiar with beat ‘em ups and just like turtles.

In Shredder’s Revenge there are two major play modes: Story and Arcade. Story mode has a few text blurbs about the events going on in the game, some side characters and items you can find by hitting breakable objects or environmental hazards, and features a leveling system that can give you more special attack meter, additional lives in a stage, or a powerful Radical mode you can use to really beat on an enemy or boss as it enhances your speed and power in exchange for all of the special meter you’ve built up during fights. 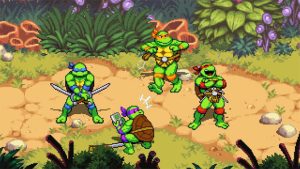 Arcade mode, on the other hand, throws out most of that and sticks you with one special gauge level the whole way through, limited lives and continues, and no Radical state, but is essentially the same game, otherwise. It’s also worth noting that you can save during Story, but you have to clear Arcade in one sitting as there are no saves, just like the old days. Arcade mode is considerably more challenging, especially on hard, and players spam fewer special attacks because you have 1 level of meter, not 3, which can dramatically help you figure out what’s going on when more enemies appear on screen in the late game.

The art style of Shredder’s Revenge is gorgeous. The visuals are vibrant and colorful, with excellently designed characters, enemies, and stages that exude character not out of place in older TMNT arcade games. The soundtrack is especially phenomenal, sounding like TMNT themed songs from Sonic Mania, which is a massively high praise as Mania had an incredible OST. Everything works together to form this beautiful piece of nostalgia that feels impressively modern, but evokes games from a time long since passed. It remixes enemies, themes, and even bosses from previous TMNT arcade games, and does so in such a respectful and loving way that it’s to be commended. 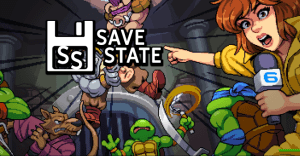 Up to six players can play Shredder’s Revenge simultaneously, and that includes having some players local connected with other players online. So, if you want to play with a child, friend, or significant other, you can still open up your game to players online who can join and help you kick some shell. Things can get pretty chaotic with that many players and enemies attacking at once, so it can get easy to lose yourself in the midst of all the action. You’ll have a good time with Shredder’s Revenge no matter if you’re alone or with a group, but having a few extra hands, or shells in this case, to cover your back during later stages of the game can always be a pleasure.

All that being said, Shredder’s Revenge is a great beat ‘em up. It’s not as technically demanding as something like Streets of Rage 4 where you have fewer defensive options and need to learn all of the differences per character in order to succeed and keep yourself out of harm’s way, so in comparison Shredder’s Revenge can be a great game to jump into with friends or children who aren’t capable of pulling off an Electric Wind God Fist in Tekken. If you really desire a challenge, though, setting the difficulty to Gnarly (hard mode, effectively) and playing through Arcade should sate your thirst well enough. 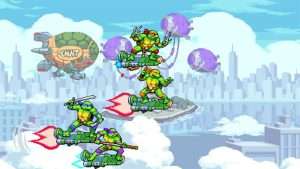 With drop in, drop out multiplayer, lots of commands at your disposal, and big, flashy attacks that are super satisfying to land big combos with, Shredder’s Revenge has a lot to enjoy. Playing all of the levels in one sitting is a little bit too much of an ask, as it’ll take around an hour and a half to clear the whole game, but some may appreciate the longer run time. If Arcade mode’s length is a bit too much for you though, you can always play whatever levels you want with friends or randoms in Story mode. As always, since this is a beat ‘em up, replaying with friends is always a big draw and a great way to extend the run time.