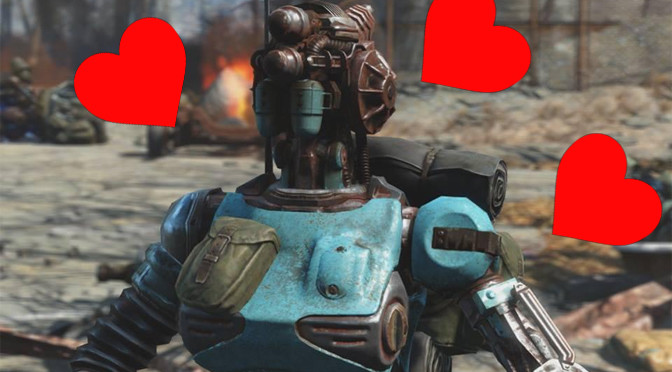 As you all know, I’ve been going through somewhat of a Fallout 4 renaissance since playing through it again on the PC. To me, going back to the main storyline on my faster PC was like playing through the game with a brand new character, and I was immediately hooked. It also gives me the chance to get another ending instead of the Minutemen ending I received on the Xbox One version.

But as of this writing, the level difference is a huge reason for me to go back to the Xbox game. Where my PC character is currently at level 30, my Xbox character is currently at level 65. Though I will admit that the PC build leveled up a lot faster. (A little advice for new Sole Survivors, unlock the Idiot Savant perk as quickly as possible. Though the sound effect will get on your nerves after a while, the triple XP boost will seriously help you out, especially if it triggers after completing a quest.)

But last week there was another reason to go back to the Xbox One side for Fallout 4, because thanks to Bethesda, I was able to obtain a season pass from them, and with it, came the first DLC expansion: Automatron.

The first thing I felt when playing the first Automatron quest was a deeper tie towards the Terminator franchise than I originally had facing the Institute Synths. In fact, when I first fought the Synths I kept thinking of the Working Joes from Alien Isolation; it almost made me fear they would have responded by saying “Tut…tut…you are becoming hysterical.” Not this time around with the insane mishmash of robotic terrors I came across. In fact, I added a new soundtrack to my list while playing, courtesy of the Sega CD version of Terminator. For those of you who haven’t heard it yet, you truly are missing out, as I’ve always considered it one of Tommy Tallarico’s best…

Eventually I come across the companion that Automatron centers on: known simply as ADA. Through her I learn about how all robots are being controlled by a mysterious figure called the Mechanist and how he needs to be stopped. So as a result, I take her along with me as a companion, and then I realized my first mistake. For most of my journey through the Commonwealth, I travelled alone, and with so I also used a maxed out “Lone Wanderer” perk which granted me an extra 100 pounds of carrying capacity. But now with ADA with me, I lost that capacity and eventually became over encumbered. So I ended up having to dump a lot of my heavier weapons that I rarely used at my workshop and still had barely enough to acquire junk.
And yes people, I know I could always have ADA carry my heavy ordinance. But I’ve never been a fan of swapping back and forth between my companions.

[amazon asin=B01DAHALNU&text=Pick up the Automatron DLC for Fallout 4 from Amazon today!]

Being able to build my own Robot construction facility also helped me build up ADA’s abilities to make her somewhat capable to fending off the Mechanist’s army. However, even with having to upgrade my Robotics Expert perk, I was only able to get her armed with a laser for a hand and defend her with Protectron level armor. It wasn’t until I finished the Automatron missions that I was able to give her the armor and firepower of a Sentry Bot but before then it seemed that she always was damaged to the point of disability and I had to constantly touch her with a Robot Repair kit in order to get her to fight back.

And then there was what I had to deal with during the final battle against the Mechanist’s base guardians. For some reason, ADA suddenly became spastic, flying around erratically and going to the point of just running around in a circle. Just trying to talk to her became a challenge in itself, and it made me fear that I would not be able to progress to the end of the quest. But thankfully I did, and when all was said and done, I travelled back to Sanctuary, upgraded her with the previously mentioned Sentry Bot parts, and then dismissed her as a companion. I’m sure over time I will bring her back into my fold, and even make her better.

I will admit one thing though. When she got back to Sanctuary and was upgraded with the Sentry Bot body, ADA stopped being spastic and functioned like normal. But still, I’ve always considered myself a Lone Wanderer. I did it with Fallout 3. I did it in New Vegas. And yes, I did it in Skyrim. So once again, I’m doing it again now that I finished Automatron.

And yes I can hear everyone claiming that once again “Todd hates everything” and I’m taking a huge dump on the DLC. I’m not. The story missions that were added are quite entertaining, and I enjoyed fighting all of those crazy mechanical abominations. It was a blast to take part in. I also loved being able to create my own robotic companion when she functioned properly. It was just with ADA acting as crazy as she did that it drove me insane. I am pretty sure it was nothing more than a glitch that will eventually get patched.
I really wish I recorded the gameplay footage as it happened; I so miss my Elgato Game Capture HD60 when stuff like this happens.
In any event, aside from this crazy moment, Fallout 4’s Season Pass is off to a good start. Bring on the Wasteland Workshop and Far Shores!