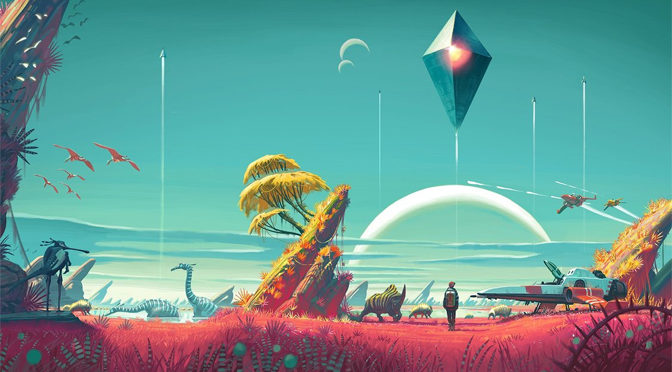 Hardcore columnist Todd Hargosh is on vacation this week, but never fear, I’m here to try and take up the mantle of his ranting and ravings about videogames and the game industry. Actually, I’m not much for rants. My neurosis is more along the lines of quiet, desperate nervousness, but I think I can be entertaining and just a bit crazy for your column-reading amusement nonetheless.

So what is bothering me this week? Surprisingly, it’s concern over the pending launch of No Man’s Sky. I don’t think I’ve anticipated jumping into a new game this much in years. Everything about the game seems to push the right buttons with me. And that is what has got me so scared, because how can the game, or any game, live up to and be as good as what I am expecting out of it? I also worry that many people probably fall into that category. We have not learned a whole lot about the title, so people are filling in the blanks in their heads with things that the game may not be able to deliver.

I tell you, my anticipation has gotten so bad that I actually breathed a sigh of relief when I heard that the original launch was delayed. It allowed No Man’s Sky to live on in that perfect space within my mind for a while longer.

One of the reasons that I am so drawn to No Man’s Sky is the type of gamer that I am. In those tests where you discover your gamer architype, I am like 80 percent explorer with a small smattering of killer and achievement hunter mixed in, and social gamer dead last. So I’m a pioneering hermit. I’m okay with that. Mostly I love to explore and discover hidden places in games. Countless MMOs have let me down because I decided to swim a river or hike an unused trail, only to find no content whatsoever at the end of my long journey. With No Man’s Sky, it seems the entire game, or at least a good 80 percent of it – which matches my gamer type – is about exploring.

[amazon asin=B00ZQB28XK&text=Come on, you know you want to explore this amazing world! Grab a copy from Amazon and join the Explorers!]

And how crazy is the universe going to be, if it turns out the way we think it will? Procedurally generated, there are going to be quadrillions of galaxies, planets and star systems available to explore. There are so many worlds that even with millions of players, the chance of two people running into one another in the game world, according to the developers, IS PRACTICALLY ZERO. Sony is not even requiring PlayStation 4 players to have a PlayStation Plus subscription to play in online mode, so they must believe that people won’t be getting together.

Think about that for a moment. Millions and millions of people playing a game simultaneously in a shared universe, and almost no chance of any player ever running into another soul. That’s big. That’s monstrous. That’s almost inconceivable. It’s so big in fact that the developers estimate that over the entire lifetime of the game, 90 percent of the worlds WILL NEVER BE VISITED or even seen by a human.

And it’s really clever how it’s being done behind the curtain. Everything is procedurally generated based on universal seed numbers, so everyone is able to share the same universe without putting massive data on a player’s hard drive. If you visit a planet and share the coordinates with others, they can visit it and it will appear the same way to them as you saw it, because the planet will be generated based on the same seed. So the developers found a way to make a universe that is procedurally generated but also consistent across all versions of the game.

Oh, and depending on how long it takes your friends to get to that planet you shared, they might see something different, because erosion and other natural geologic processes are going to be taking place, and all the animals are going to be evolving, living and dying. If it takes your friends a long time to get there, they might find that all those cute little poodle creatures you named have mutated into dangerous alligators, died off all together from some plague or taken over the entire planet. Those beautiful mountains you screenshotted might have crumbled into the sea and that giant lake may have become a meadow or forest. My heart weeps thinking of all those unvisited planets that will be living and dying without anyone ever coming around to enjoy them.

The developers say that the goal of the game will be to get to the center of the universe, something that will be hinted at in the lore that can be found as you explore. Someone who goes straight in without doing any exploring or questing other than to get enough experience and equipment to survive in the more hostile middle part of the universe should be able to do it in about 40 hours. In a way, that reminds me of one of my favorite games of all time, the classic Starflight, which in a way was the No Man’s Sky of its day featuring a huge open universe where you could land on and explore any planet. In Starflight, you also had a goal, but the fun, at least for me, was exploring the worlds. I can comfortably say that I won’t be getting to the center of the universe in No Man’s Sky in 40 hours. It might be 400 before I even consider heading that direction.

But now for some of my fears. Can a game like that really be as cool as it’s been described? And if the sort-of goal is to find the center of the universe, wouldn’t it make sense that people will be running into one another as they all approach that central point? As millions of people fly closer to the middle, those vast distances will become a lot smaller. I wonder if there will be traffic jams as the universe literally closes in on us?

Also, although I am totally within the target market for a game like this, a part of me wonders if all that open-ended exploration will become boring after a time. With no dedicated quests and no over-arching villain to fight, no crew to manage and no galaxy to save, might just walking around and looking at cool creatures become more of a tech demo and less of a game over time? Can we really enjoy a title where we aren’t the hero of the story; a game that might make us ultimately feel small and insignificant, and unable to affect the larger universe?

I don’t know those answers. I hope that all my anticipation turns out to be justified and that all my fears are dispelled. But we will all be able to find out in a few days. No Man’s Sky launches on August 9th. I’d say “see you in the game,” but the chance of that happening is practically zero. In any case, it will (hopefully) be a wild ride, and I wish you all luck and good fortune in your travels.

Are you looking forward to No Man’s Sky? Tell us why in the comments below as we count down the final hours before launch.