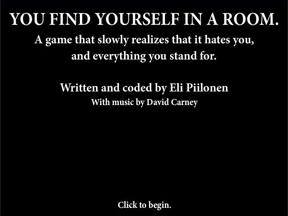 You Find Yourself In A Room

Hello again everyone! For these last few weeks I’ve been hitting you with small $10 games. Since this is a Time Waster Review I thought I could take you on a fun ride with a free game this time around. That being said let’s get this going.

You find yourself in a room. It’s almost bare, except for a bed and a box with a padlock on it. That my friend is how we start this game off, no epic adventures to slay a dragon or save the universe. Instead we just find ourselves in a room. Let’s be honest though, have you ever really cared about slaying a dragon or saving the universe? I didn’t think so, instead what we’ve always cared about is the journey to that point, because in the end we always knew we’d win, we just didn’t know what was going to happen along the way. You Find Yourself In A Room really focus on this, instead of caring about reaching the end of the game you want to know what we’re going to have to go through to reach the end, and that is the fun of the game.

I guess I haven’t really told you exactly what this game is yet have I? Well maybe some of us remember the text based adventures of yore. When exploring the world truly looked however you wanted it to and almost nothing was beyond doing. For those of us who do remember these times, You Find Yourself In A Room will bring back a lot of these memories, if you weren’t on that band wagon though I’d advise you to reevaluate your gaming history.

So we know this is a text based adventure, but what else? Well not much else. The game is a short when compared to other text based adventures, but then again we get to play it in our internet browser so this is to be expected. What does save it though is the game itself. That’s right the game hates you my friend. At first it isn’t so bad, but later on we come to realize that this game could only be the child of GLaDOS. The sarcastic game is literally what makes this adventure worthwhile.

As for the overall presentation of the game, well its white text on a black background. So there isn’t much to the graphics, but then again there isn’t supposed to be. Instead the game allows you to create this room, pick out its color, what the walls are made of, etc. The game does provides us with a musical score though, or at least one track that loops through the whole game. Again this doesn’t hurt the game. Stop and realize that music changes in game based off of your actions and environments. So is it really surprising that a game that takes place in a room would really only use one track to represent that environment?

Overall we have a great little game on our hands here. It’s kind of a blast from the past, but it still has that modern twist to it.

You Find Yourself In A Room earns itself 4 GiN Gems out of 5.