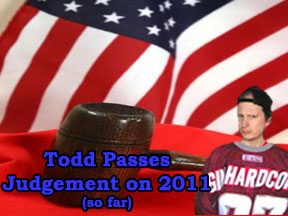 The year 2011 is half over already. I cannot believe it. Here we are just recovering from E3, with its announcement of two new systems, as well as the aftermath of an online service that was taken down for a month due to hackers. But still, there were a lot of games to be played. My associates over at the GiN Lounge were able to give their take on the games of the first half of 2011, but since I wasn’t able to make an appearance, I have my own column to speak my mind about what I thought was the best, and of course, the worst, of the past 6 months. Do keep in mind that these are based on games that I have PLAYED or events that I have taken part in this year, so don’t go crying to me if your favorite or most hated games are not on this list.

Let’s start with my best picks of the half year…

Even two months after the events of SoR Remake, I am still steamed at the way Sega pulled this fan based masterpiece off of BomberGames’ website. Either way, it doesn’t stop me from enjoying it. There is still tons of unlockables that I have yet to open, not to mention all the stages that I didn’t even see yet. The storyline changes every time I play it, and never gets boring at all. Oh, and need I obsess more about the remixed soundtrack? I’m actually playing it in the background while writing this, and as I said before, if you make the soundtrack to Streets of Rage 3 sound good (What were you thinking, Yuzo?) you know you’re doing something right. I’m still longing for an XBLA/PSN release.

Considering I had not played a Mortal Kombat game since MK4 in 1997, I didn’t know what to expect with the latest game. Thankfully the newest release took all the elements from the first three games and made an enjoyable fighting experience. We now have a story mode which begins almost the same way the first live action movie (and one of the few GOOD video game movies) and leads to the events of MK3. An online spectator mode that allows us to watch (and even rate) other fights as they take place, tons of unlockables, and more characters coming out via DLC. Skarlet is already out this week, and more are on their way. Even without the DLC, there are tons for fighting game fans to enjoy, both offline and on.

After what Rockstar did with Spaghetti Westerns last year with Red Dead Redemption, I didn’t think they could do the same thing this year with film noir, but they did with LA Noire. The story pacing is excellent, investigating crime scenes and collecting evidence is enjoyable, and yes the conversations and interrogations are so good looking it’s actually quite frightening. Sure it might not have the sandbox style gameplay we are used to but it is still quite the experience, and the homicide cases centering on the Black Dahlia murders might be one of the best mini-campaigns I experienced ever.

Oh yeah, and playing in black and white helps add to the experience. I think I mentioned that in a previous column.

Uwe Boll. The name alone makes me want to down a bottle of pills if I am forced to sit through one of his movies, and when I bit the bullet and watched Postal on Netflix last year, Kelly had to talk me off of the ledge. It was that bad. Leave it to my love of riffing films a la Mystery Science Theater 3000, a room full of game nerds, and Duke Nukem himself, Jon St. John to actually make sitting through that cinematic atrocity one of the most fun experiences I had in a long time. It was the funniest two hours of my life, and to this day, Jon himself asks me on Facebook about how Verne Troyer survived the room with all the monkeys. I still don’t have an answer for that.

Ok, enough with being serious. Time for the fun, ripping into what I thought was the worst so far.

The last Red Faction game (Guerrilla) had some elements that I really enjoyed, such as the open world environment, the joy of destruction, and tons to see and do. It did have one critical flaw though…the combat and cover system were abysmal. I couldn’t even get into cover without being ambushed from all sides. I was hoping that Armageddon would have resolved that but that wasn’t the case. Even though the main character had a nanoforge that allowed him to rebuild cover, good luck getting it to work when being attacked from everywhere. Once you get your cover up, it was all gone. I also got tired of the repetitive bug hunt combat that occurred and lost interest quite quickly. Please Volition, make another Guerrilla-style game but get the cover mechanics done right!

The original Rush ‘n Attack (or Green Beret to some of you out there) was one of my favorite mid-80s arcade game. It was a simple side scroller where you knifed Russian solders (nice pun there Konami) to rescue POWs. Or if you played the Nintendo version, to destroy a nuclear missile. The Czech developed modernization of the game tried to emulate the success of Chair’s Shadow Complex, and failed miserably. It was nowhere near as fun as Shadow Complex, more confusing, and just an outright mess. THIS is why I hate re-imaginings of classic games. Cough XCOM IN NAME ONLY cough.

WHYYYYYYYYYYYYYYYYYYYY? Why Capcom did you have to ruin a great fighting series the way you did here. I loved Marvel Vs Capcom 2 on the Dreamcast and XBLA (despite the horrible lounge jazz soundtrack) because it felt like a typical Capcom fighter and had a massive roster of characters to fight as, 58 in total. So what happened here? We only have 38 this time, with two as DLC. Some of the characters are miserable to play as (MODOK and Spencer) and some are complete cheating a-holes (Dormammu.) Not only that, the gameplay is very barebones, there is no true story line (nowhere near the level of Mortal Kombat) and the worst part, the controls were skewered! Capcom couldn’t even make an option for classic MVC players to use that control scheme or MVC2’s? And I will NEVER forgive whoever gave the option for a Simple Mode that allows noobs to button mash their way to victory online. At least put a filter in to prevent access to Simple Mode for some real competition. Never had I been more disappointed in a fighting game release than this. Well, maybe BlazBlue.

I only had my PlayStation3 since this February, and so did not have much time on PlayStation Network compared to others, but I do feel their pain with what the hackers did in bringing an entire network down like they did.

While I don’t play many games on PSN compared to Xbox Live, I do use my PlayStation3 for both MLB.TV and Hulu Plus, both of which I couldn’t use as a result. Granted the hackers did this to get back at Sony over the GeoHot legal action, but in the end you guys hurt the gamers rather than helped them. Nice job on that one!

At least on the bright side, Sony did support all those on PSN and offered a quite impressive Welcome Back package. Two PS3 games from a good selection, a month of PlayStation Plus and a year of identity protection? Very nice. Now, how about all of those with their credit card information stolen already? Will they get reimbursed? I doubt it.

I will be looking forward to what the rest of 2011 will provide. Will the PlayStation Vita be successful, or will it falter due to lack of software like the original PSP? Will Gears of War 3 provide a fitting end of the story? And most importantly, will Skyrim keep their 11/11/11 launch date or will they, like many other games, cower in fear and delay with the Modern Warfare 3 launch? Time will tell…