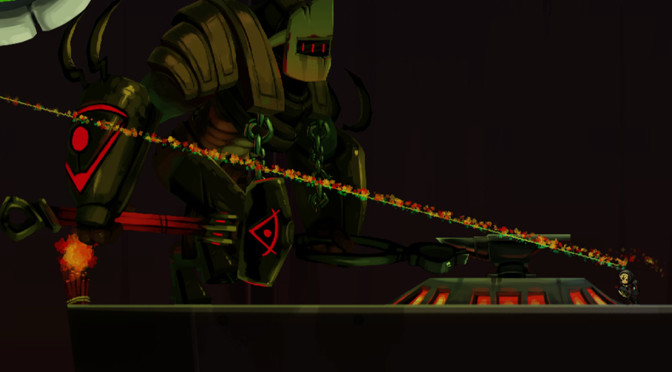 I gotta admit, I didn’t expect to be playing something published by Adult Swim Games that has nothing to do with one of its shows. But that’s exactly what I got with Oblitus.

Oblitus is a side-scrolling adventure game that puts players in the role of Parvus, a man with no memory. Parvus has been tasked with killing four guardians that lie in different areas of his world. He isn’t told why he must do this, but he takes up his spear to complete his quest.

Oblitus has a heavy focus on adventuring to discover hidden benefits, such as armor and enchantments, in the world. The game totes itself as having a “procedurally-generated” world. However, the world of the game never really changes. There might be a minor difference here or there, but the world stays 95% the same in every playthrough. The only thing that really does change is what items appear at what locations. Heck, even the spawn points for these items don’t change at all.

Oblitus’ other main focus is combat, and it does it very well. Parvus carries a spear that he can use for stabbing enemies, he can also throw it at opponents and it will automatically return to him after a short time. Other skills he has include being able to dodge roll, jump and block with his shield. If timed correctly, he can also parry enemy attacks with his shield and use his spear to perform a long jump after rolling. Players will have to master all of this to have a hope against the various enemies and bosses in the game.

Speaking of bosses, Oblitus does them right. Each of the four bosses have their own unique feel and mechanics to them and players will have to learn quick if they don’t want to die. Bosses also don’t have horribly obvious weak point, which is such a welcoming feature over the barrage of glowing spots many games use to guide players along.

If it isn’t already clear, Oblitus is meant to be a tough game. However, I think the developer may have went a little overboard. I say this because the game has permadeath and no saving. Permadeath is already a pretty mean concept in a game, but pair it up with bosses that have one-hit kill attacks and it just becomes downright stupid. The game has no checkpoints or save locations, so players will have to start off from the beginning every time they die. The lack of save and check points also means that there’s no way to quit the game midplay without losing everything done up to that point. The game could really benefit from just adding in temporary saves that are deleted when the player loads them up or dies.

The graphics in Oblitus are great. It offers players really detailed environments and has a protagonist that really sticks out appearance-wise. One of the smartest decisions the developer made was to avoid pixel graphics. I love them, but no one can deny that the indie game market is flooded with them. This one decision really helps the game stand out.

Another triumph for Oblitus is its audio. The sound effects work well with the game and are spot-on at representing what’s happening on screen. Better than this is the music. It’s got a tribal feel to it and that alone was an interesting choice, but it’s even better because it perfectly syncs with the game to make a wonderful atmosphere.

I’m really torn on Oblitus. The game has so much good going for it. However, the few mistakes it does have are major. Permadeath, no saving and the misleading it does by saying it’s procedurally generated are some really nasty marks against it. On the flip side, the game has great audio and visuals and it’s combat is really solid. However, the $15 price point does it in. I just can’t justify this game for that price. By all means, pick this game up when it’s on sale, but don’t pay full price for something that feels half done.