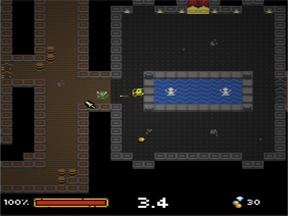 As I browsed around the web this week I stumbled across a game called Dungeon Deadline. I love dungeon crawlers and deadlines always make things more hectic, so I thought I’d give it a shot.

Dungeon Deadline is an entry into Ludum Dare; this is a competition where game developers are given 72 hours to create a game. This year’s Lumdun Dare used the theme of ’10 seconds.’ This is where the deadline part of the game comes in.

Players can choose between three different classes: Mage, Warrior and Ranger. The player must then fight off monsters and explores dungeons in 10 second intervals. There are six dungeons to be explored and a final boss. Players can upgrade their characters health, attack and speed with money that they collect in the dungeons. The ultimate goal of the game is to collect enough money within the first six levels to become powerful enough to defeat the final boss. If players don’t defeat the final boss in 10 seconds, they lose. This may seem like a simple task, but when pressured to find enough gold to upgrade characters, it becomes a mad rush to collect as much as possible.

I can honestly say that I didn’t beat the game until my fourth or fifth play through. Having to play through the game multiple times didn’t bother me though. The whole game can be played in under two minutes, which made restarting much less frustrating. I think it’s safe to say that everyone will have to play through Dungeon Deadline a couple times before beating it. Not to mention replaying the game as different classes.

The classes in the game aren’t the most balanced. Warriors have no range, which puts them at a disadvantage. Pumping a warrior’s health and attack are the best way to go, but even then it’s difficult. Mages shoot three projectiles in a shotgun blast from their staffs. This makes them great for taking down large groups of enemies. I think Rangers have it the best. Rangers shoot a fast stream of arrows from their bows when attacking. The fire rate is so high that large groups become easy to handle, and the boss doesn’t stand a chance. I guess if I were to rate difficulty I’d say that Rangers are easy mode, Mages are normal and Warriors are hard.

Some of you may have already taken a look at the image included in this article. Yes, the graphics are the same as a previous Time Waster, Realm of The Mad God. Before anyone shouts ‘Thief!’ let me explain. The graphics used in both Dungeon Deadline and Realm of The Mad God are public domain. Anyone can use them, so it isn’t theft.

Dungeon Deadline isn’t bad for a game made in a 72 hour period, in fact, it’s actually quite good. The game has a nice amount of replay value, and it won’t hog up a lot of time. Gameplay is simple, but the franticness that comes with the 10 second time limit makes it enjoyable. The classes are broken, but what dungeon crawler has ever had perfectly balanced classes?

Dungeon Deadline finds 4 Gin Gems out of 5 hidden in a chest.