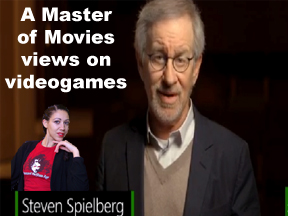 Earlier this summer, George Lucas and Steven Spielberg were invited to speak on a panel at the USC School of Cinematic Arts, where they discussed the future of entertainment, no less. Apart from predicting the collapse of major film studios and the birth of a Broadway-style, high price-tag, cinema experience, Spielberg also tackled the subject of games. He was equally gloomy about our beloved industry, saying that "so far, games have not been able to create the same empathy with onscreen characters that narrative forms have." But is he right? Do games struggle to tell stories or deliver characters we empathize with?

Spielberg seems to see no value in the interactivity of games, when it comes to telling a story. He said, "The second you get the controller something turns off in the heart and it becomes a sport." Meanwhile Lucas was more measured. Considering he’s the man behind LucasArts, which produced some of the games industry’s most beloved characters, you’d hope he’d be a bit more positive. Whilst he did say that games can and will create characters we empathise with, he says they haven’t yet. He lays the blame on hardcore gamers, who he sees as driving demand for violent games.

David Cage, from Quantic Dream and The Chinese Room’s Dan Pinchbeck beg to differ with what Spielberg and Lucas had to say about games. When asked at the Sony Gamescom press conference to comment on the views of these Hollywood giants, Pinchbeck said, "I just think, ‘has he ever play a game recently?’ It’s rubbish." He went on to say, "Of course you can tell stories in games. It’s garbage and I don’t know what he’s talking about."

Quantic’s David Cage also disagreed with the big name directors, saying, "You can tell a story through gameplay, and I would even say it is even more powerful for telling stories." He went on to say that player interaction could make a story more interesting because they decide where it goes next, and films can’t do that.

It would be easy to get defensive and call Lucas and Spielberg two old goats who don’t understand games. But that’s not my style. Spielberg does have a point. There is an element of disconnect when you’re actually playing a game, as opposed to when you’re watching a cut scene. When you’re controlling a character, you’ve got a task. You’ve got to focus on hitting the target, finding the key, driving the car or whatever it may be and that does mean you put your emotions to one side for a moment. But that doesn’t mean you stop being emotionally invested, which is what Spielberg implies.

The Last of Us is one of the best examples of emotional storytelling. I think I felt every moment of that game. Okay, maybe not when I was making nail bombs or Molotov cocktails. But when you’re exploring the world with Ellie and walking through empty houses or empty neighborhoods and looking at the decay, you can’t help but feel. Your sense of peril is greater in a game, because you’re the only one that can get you away from the big bad. In a cinema, you can rely on the director to do that for you.

I think it’s clear from games like The Last of Us and Heavy Rain, that games are more than capable of creating empathetic characters. It takes a lot of skill and consideration and maybe most games don’t manage it, but it can be done. So for Spielberg to dismiss games, in their current state, seems a little misinformed.

Spielberg is obviously interested in games because he’s tried his hand at making quite a few, normally with disappointing results. E.T. anyone? Do I really have to mention Director’s Chair? And although Boom Blox had its fans, it was no marvel in storytelling and certainly didn’t live up to what you’d expect from a master storyteller like Spielberg. But to give him his dues, the Band of Brothers and Saving Private Ryan creator is also credited as the creator of Medal of Honor, which ultimately led to the market-conquering Call of Duty. That aside, he clearly needs to take a closer look at games and the stories some of them are telling.

It’s interesting to see that Lucas thinks games that appeal to women are the key to making strides in storytelling within the medium. At the panel, he said, "The big game of the next five years will be a game where you empathize very strongly with the characters and it’s aimed at women and girls." He then made the rather sweeping statement, "they like empathetic games." Lucas then added, "…as a result that will be the Titanic of the game industry, where suddenly you’ve done an actual love story or something and everybody will be like ‘where did that come from?’ because you’ve got actual relationships, instead of shooting people."

I have to agree with Lucas here. Surely games have more stories to tell, than just the story of war. Whether that’s gang war, alien invasion, one man’s fight to find who killed his wife and then kill them – there’s got to be more than this. And if that means making a love story that appeals to a female-centric audience, so be it. Why not?

If you look at the genre list for books and cinema, versus games, gamers are stuck with around seven, compared to at least twice as many for films and more for books. In addition, game genres tend to define how you play, for instance, a shooter or dancing game, not what the story is. So there is no drama or comedy or historical section in games shops and that’s a shame.

Games are young, compared to cinema and they’re making progress all the time. When games are as old as cinema, who knows what stories we’ll be playing and how we’ll be playing them. It’s good to have two old goats criticize our industry. It makes us examine it and think, how can we be better and prove the old goats wrong.