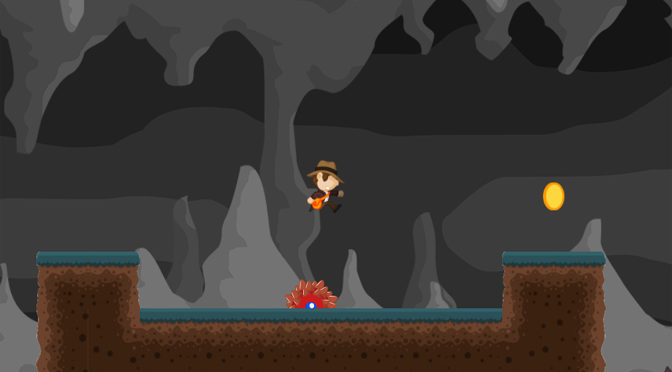 This week my time wasting led me to a 2D platforming game called The Cave Explorer.

The Cave Explorer is a game that has the player always on the move. No, really. Players can’t control the movement of their character. Instead, they can only chose when to jump. This means that players will likely have to play some levels more than once due to not being able to see what’s coming. It’s a bit of a bummer and feels more like cheap deaths when it happens, rather than a lack of skill on the player’s part.

The goal of The Cave Explorer is to collect all coins in a level and reach the exit orb that appears afterwards. It’s not really a challenge and there’s nothing in the way to replay value once a level has been completed. There’s no high scores, time attacks or anything really. This is probably due to the limited nature of the game. Maybe throwing some extra goals in here and there could’ve helps this title out.

This isn’t my first time seeing a game like this, but it’s been a while. I remember growing up as a kid there were games installed on our satellite receiver. I know that sounds really weird, but it’s true. They were always simple games like this and there were time limits because the provider wanted players to buy subscriptions to play the games. Needless to say, the games available through this service were trash and not worth the subscription. It also didn’t help that a TV remote didn’t make for a very good controller. I don’t know if this is still a thing that satellite companies do, but I can’t imagine it is.

So The Cave Explorer reminds me of some crappy games that I played through our satellite provider when I was a kid. That’s definitely not a positive association. However, it is a fair one. The game is really bland and there’s not much in the way of challenge. The simple controls and easy levels really make this more of a casual game than anything else. Even when calling it that, it’s still a bit lackluster. Casual gamers will easily be able to breeze through it without the slightest bit of difficulty. Sure, a death or two will occur, but levels are really short and the mistakes will be easily fixed in the second run.

The visuals in The Cave Explorer are also somewhat underwhelming. There’s a real lack of detail in the game and this leaves it looking way too simple. Maybe it was a conscious decision to do this for a different style, but it kind of just feels lazy.

The audio in the game also doesn’t match up with it. It has this one really upbeat track that plays during the entirety of the game. This just doesn’t fit with the Indiana Jones backdrop that the game is obviously trying to present. However, the sound effects are alright and audio levels are properly adjusted.

Overall, The Cave Explorer isn’t really anything worth your time. It’s too simple for even casual players and doesn’t bring anything interesting to the table. The game is short, maybe 10 minutes, which is really a plus for anyone that wants to give it a shot, but there are better ways to spend your time.

3 thoughts on “Becoming The Cave Explorer”