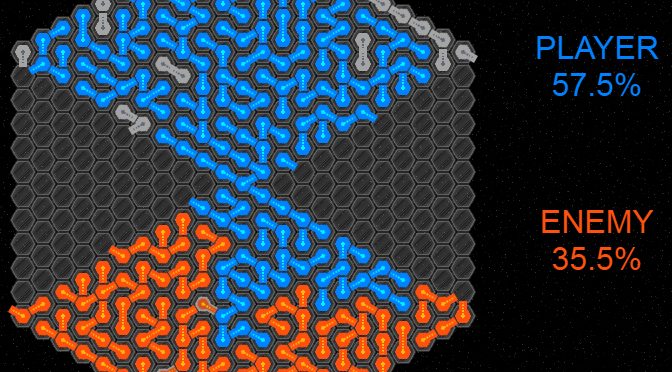 This week my original plan was to review another rogue-like game, but like the last time, I just couldn’t find enough time to really give it the proper attention it deserves. Heck, I’ve barely made any progress at all in Octopath Traveler either, and that’s my favorite genre of game. Needless to say, this has been a busy summer. So instead of a rogue-like, I present you with Corruption.

Don’t worry, Corruption isn’t anything contagious. Well, maybe that’s a lie. It’s a little browser puzzle game that I find incredibly addicting. The game pits the player against an AI in a battle to take over as much of the board as possible. This board is made up of small circles with an end sticking out.

Both the player and the opponent start with just one circle. However, they can rotate that circle to capture more circles. The circle will take over another circle that it touches with the end that is sticking out of it. This can cause a chain effect that can have the player taking over multiple circles with just one action.

Players won’t have to worry about nimble reflexes in Corruption. The game’s big focus is strategy and it also works on a turn system. Players must click on a circle to complete their turn. This rotates the circle clockwise one space. The AI then does the same. The flow of the game is simply capturing pieces of the board until one player wins. There’s a couple of ways to do this.

The first way to obtain victory is in the Domination mode. This mode requires either player to control 70% of the map to win. The next is Obliteration. In this mode the player must completely wipe out the enemy AI from the battlefield to take victory. Players can also win the Domination mode this way as well.

Corruption features four different maps for the player to take on. Each of these maps have their own twists that keep the game interesting. There are also several different settings for the AI. This includes a difficulty setting, as well as a behavior setting. The behaviors setting allows the player to make the AI more aggressive, passive or have it play normally.

The overall presentation of Corruption isn’t much to talk about. Visually speaking, the game doesn’t impress much. There’s also only a small sound effect for rotating the circles and no music at all. I’m not one to care much about flashy graphics, but even I can’t deny this is a bit bare bones. I mean, just one song is all I want. It can just loop endlessly for all I care, but give me something!

Overall, Corruption is a good way to waste some time. The game may not look or sound the best, but that’s okay. It makes up for this with its interesting gameplay mechanic and level variety. The various options for the AI also add some replayability for those really looking to stretch those brain muscles.

Corruption earns a total of 3.5 GiN Gems out of 5!